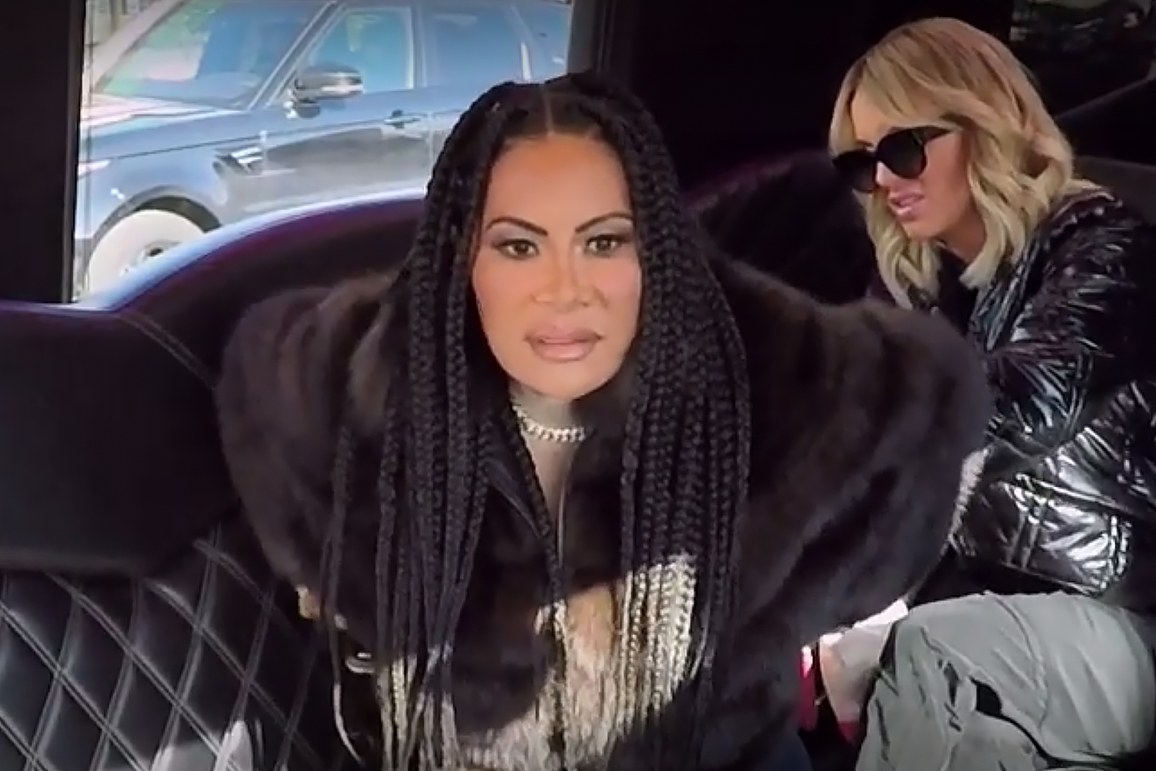 There was no other way this season of The Real Housewives of Salt Lake City could have started. They had to address the elephant in the party van, which was Jen Shah’s big old legal troubles that will be looming over this entire season of the Bravo show. The network even wisely dropped the first moments of the show online last week to get people buzzing about Season 2, and it was impossible not to be intrigued. The premiere opens with footage of the women getting ready to embark on a day of fun, when Shah (and those unfortunate braids) gets a phone call worthy of making her eyes go wide, quietly asks Whitney Rose to remove her microphone, and drives away in a pickup truck. The next thing we know, the Feds (new Friends Of this season) arrive looking for her. Is this Real Housewives or Cops? Well, as this season is likely to prove: both.

In the first two minutes and 44 seconds of the premiere, over ominous music, we see clips of Shah leaving after she tells the women, “I have some bad news. I just got a phone call and I need to go.” Of course, that’s where the drama starts, but that’s certainly not where it ends. Heather Gay asks the group, “You guys, what if she’s on the run?” Lisa asks, “How did they know she was here? Somebody had to have told them she was here,” referring to the parked van in the Beauty Lab (Heather’s business) parking lot. It’s Whitney Rose who reads the headline from her phone, “Real Housewives star charged in massive fraud, money laundering scheme,” breaking it down to the women as, “Her and Stu were charged for stealing people’s money. Fraud.” There are clips of Shah leaving the courthouse later that day, and we see how the season will play out — not dissimilar to what we’re seeing on The Real Housewives of Beverly Hills this season, as Erika Jayne grapples with her own legal troubles.

But…did that premiere only set the season up to fail? If we’ve learned anything from Denise Richards’ devilish grin in front of a green screen, it’s that Real Housewives shows can sometimes overpromise at the start of a season. Now, it should be stated that this season of RHOBH continues to deliver on the Erika legal front, and after an explosive trailer at the start of the season as well. But how much will RHOSLC dangle Jen’s drama throughout the season? Will it be ALL we are watching for? And how much more of her scream crying can we really stand?

RHOSLC is following the same formula as its West Coast counterpart. New cast member Jennie Nguyen is seen asking the women, “Did you have business with Jen?” as Heather states, “I don’t want to be indicted, I don’t want to be involved,” just as we’ve seen Sutton Stracke and Dorit Kemsley make similar comments on their show. The show then takes us back to the beginning of filming two months earlier, or in Real Housewives, time, about a half of a season. This means, we’ll spend the next several episodes looking for all the clues as to how Shah landed herself in this situation: showing off her handful of assistants, making cagey statements about what her job actually entails, and displaying her wealth in a new home she’s leasing, the Shah Chalet 2.0, which comes with plenty of “amenities” including an exercise room that was turned into a closet with all of her expensive clothing on display. Hell, there’s even the strangely foreshadowing comment she makes to Lisa Barlow when she says, “I haven’t been to jail yet!” with a laugh while referring to the lengths she would go to protect their friendship. Of course Bravo throws her a bone and allows her to explain that she almost got a divorce from Coach Sharif Shah — but it will likely also be part of the storyline as we wonder: did he know what was coming?

Obviously, the show has no choice but to make this the central storyline this season, as it was handed to them on a platter. And it’s why many people will tune in. But that doesn’t mean it’s not worrisome. The thing about RHOSLC is that the show is coming off one of the best freshman seasons in Bravo history. We found these women interesting enough, just as they were, with rather tepid drama (ie: comments about smelling “like hospital”). Will the Shah drama (Shah-ma?) leave moments like Whitney and the birthday cake mishap on the cutting room floor? Will we get less of Meredith’s son Brooks Marks, one of the more interesting family members a franchise has ever seen? Will we really get to know promising newcomer Jennie (and please, please do not relegate her to the Crystal role of solely having to educate these women on her culture)? However, if this does mean cutting down Mary Crosby’s creepy cult storyline and simply saving her best confessional moments for the show, I’m cool with that. And despite only being one episode deep into this season…where does a Season 3 of this show even go after fraud investigations?

I’m choosing to put my faith in cast members such as Heather and Whitney who have naturally understood their assignment as Real Housewives more than most. I’m interested in Jennie. And most of all, I’m not upset that this will likely be Jen Shah’s last season on the show. It was a great premiere episode, one that will surely have viewers hooked — but into what, exactly? How much will Jen Shah even say moving forward? Will any of it be truthful? And will this drama play out in a way that is exciting or excruciating — as we’re learning that line is as thin as ever? RHOSLC is back and it’s giving us all chills — but will it heat up in the wrong ways?