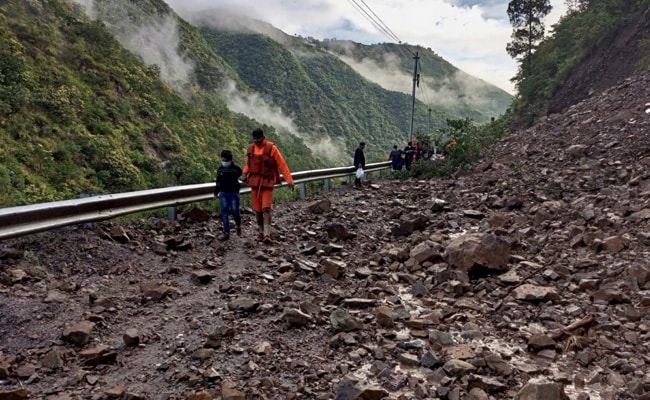 Dar – the first village of the Darma valley in Uttarakhand’s Dharchula sub-division – is gradually sliding down the slope as the land beneath continues to weaken, making it unfit for human habitation, a geologist who surveyed the village on the orders of the district administration said.

“At least 35 families out of a total of 150 living in the village need to be shifted immediately as the houses they live in are slowly sliding down the slope,” said Pradeep Kumar, who led a team of geologists to the village for a survey recently.

The cause of the downward slide is the widening work on the Sobla-Tidang road besides underground water bodies that are making their way downhill, weakening the land on which the village is situated, he said.

These water bodies went underground after being buried under tonnes of landslide debris around 200 years ago and they are gradually receding further down making the upper layers of the soil even weaker, Mr Kumar said.

“The village is situated on landslide debris which already has weakened the soil as it has no hard rocks beneath,” he said.

Nearly 200 villages of the Dharchula and Munsyari sub-divisions are situated on debris that had accumulated following landslides in the surrounding hills over centuries and are highly sensitive to landslips, he said.

Gram Pradhan of Dar village Savita Devi had written to the administration complaining about the sliding slope of some houses in the village. A team of geologists led by Pradeep Kumar was sent by the district administration to the village for a survey following her complaint.

“The families living in endangered houses need to be immediately shifted to safe places as a calamity might occur any moment,” she warned.

Dharchula sub-divisional magistrate AK Shukla said further action will be taken after he receives the survey report from the team of geologists and studies the report in detail.