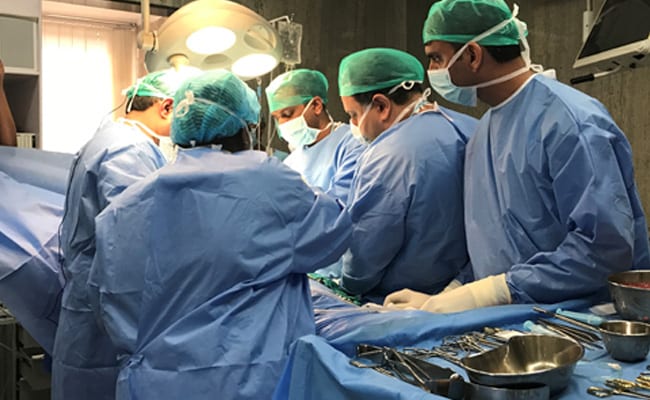 The patient, a resident of UP’s Meerut, was suffering from chronic obstructive pulmonary disease. (File)

A 55-year-old man, whose lungs had been damaged due to the coronavirus, underwent a bilateral lung transplant at a private facility in Delhi after donor organs were transported 950 kilometres in three hours, according to a statement.

The surgery took place at Max Hospital in Saket and the hospital said it is the first time in North India that a bilateral lung transplant has been done with the help of extracorporeal membrane oxygenation, (ECMO) support.

The patient, a resident of Meerut in Uttar Pradesh, was suffering from chronic obstructive pulmonary disease (COPD).

His lungs were damaged due to Covid and he was too unstable and desaturating badly, said the hospital in the statement.

“He was on high flow oxygen and required intermittent BIPAP support. Only option that could save his life was a lung transplant,” it said.

At the hospital, he was evaluated in the past and had been put on the waiting list for lung transplant by a heart lung transplant team led by Dr Rahul Chandola, the statement said.

On December 22, the National Organ and Tissue Transplant Organization notified about a brain dead donor at Ahmedabad. This patient was a 44-year-old man who died due to brain haemorrhage.

The team following the notification then went to Ahmedabad to harvest his lungs, the statement said.

A green corridor was made between the Civil Hospital and the airport at Ahmedabad, and then between the IGI International Airport here and the Max Super Specialty Hospital at Saket to get the organs promptly, it said.

Covering a distance of 950 km in three hours, the lungs were transported without a glitch, it said.

This entire process ensured the retrieved lungs to be transplanted within the critical eight-hour chest to chest period.

Talking about the patient’s condition, Dr Vivek Nangia, Principle Director and Head of Pulmonology in Max Super Speciality Hospital, Saket Complex said “This patient had come to us with bullous lung disease, where the lung had already developed multiple bullae or balloon like structures and the patient was finding it difficult to breathe.” “He had been on oxygen for almost about a year now and was not improving and there was no other treatment for it,” he said.

Mr Chandola said that the patient required extended ECMO life support for 10 days post operatively and was gradually weaned off from ventilator subsequently.

“It was a very complicated surgery and we performed this double lung transplant on extended ECMO life support for the first time in North India. Now the patient has completely recovered and both the lungs are working perfectly,” he said.