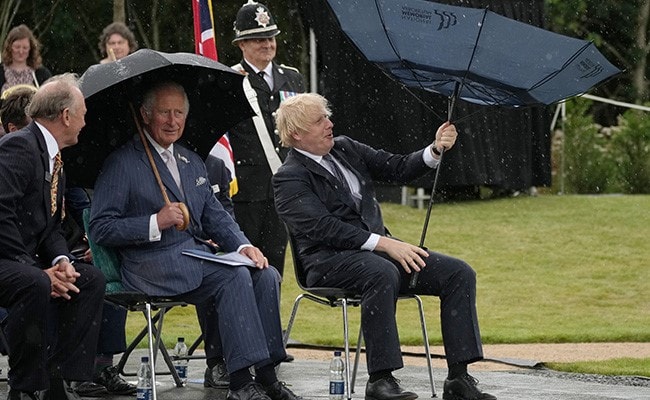 You can be one of the most powerful people in the world, but when you are having a bad day, there is not much you can do. And if you are a public figure chances are that your struggles are for the world to see, especially in this age of social media. British Prime Minister Boris Johnson found himself in such a spot recently, he was caught in a tricky situation with an umbrella that just refused to cooperate with the leader. Mr Johnson was at a memorial service for police officers when he found himself in this slightly weird and embarrassing predicament.

The clip, shared by Sky News, shows Mr Johnson struggling to control the errant umbrella, albeit to not much avail. The umbrella first refuses to open and when it does, it turns upside down much to the amusement of Prince Charles and the other officials who were seated next to Mr Johnson. Even Mr Johnson is seen breaking into a laugh as he struggles with the umbrella.

Reacting to the video, several social media users could not help but break into laughter.

One user noted, “Two days in a row now there’s been an issue with his umbrella,” asking if the government could buy him a new one.

two days in a row now theres been issue with his umbrella. Can the government buy him a new one at taxpayers expense or will the media turn it into another wallpaper story for a month?

Another user even called the leader a “goof”, adding that incidents like this made people love him.

Such a goof sometimes, its why you have to love him, normal bloke.

Some even confessed that they faced the same issues with their umbrellas.

This made me laugh. This happens to me everytime I try and open an umbrella when it rains – it always manages to turn the wrong way ????????

Another user opined that he was perhaps just not good with umbrellas.

Tell us what you think of Boris Johnson’s predicament.

WHO says coronavirus deaths up 21% in last week