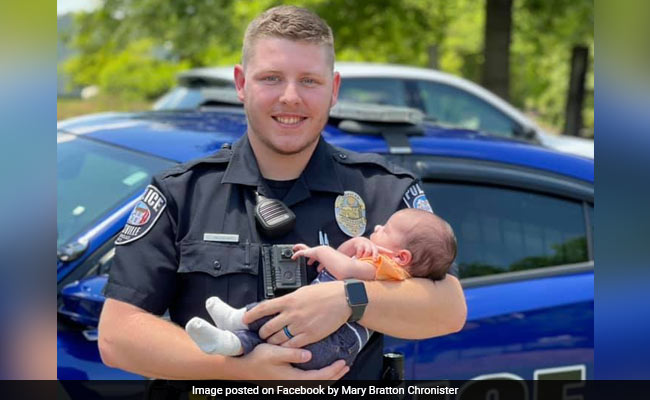 Accidents can happen any time anywhere, but the quick-thinking of police officers like Cody Hubbard deserves all the praise for knowing what to do to make sure there’s no damage caused. But who is Mr Hubbard, you may ask. He is a 23-year old police officer from Pottsville Police Department in Arkansas in the United States who saved a three-week-old baby from choking on his medicine. On Thursday, the Pottsville Police Department posted a picture on their official Facebook handle that showed Mr Hubbard holding baby Grady, mentioning how he saved the infant’s life.

The caption read, “As an officer, you never know what is ahead of you for the day. It can go from 0 to 100 in the blink of an eye. Last Saturday, officer Hubbard went above and beyond to save a little life. Thank you, officer Hubbard, for your quick response. This is what we are all about!”

First-time parents Joe and Katelin Chronister had administered anti-gas medicine to their three-weeks old baby boy when the infant started choking on it and turned “purple”. The family dialled 911, which was what brought Mr Hubbard to the rescue.

The cop turned the baby over and repeatedly patted him on the back until the baby coughed out the medicine.

“We were trying everything, and it seemed like he knew exactly what to do”, the father was quoted as saying by Fox16.com.

Mr Hubbard said he had faced a similar situation with his own daughter. So, with Grady, he was familiar with what he was required to do. After the infant coughed out the medicine, he started crying, which brought relief to the panicked parents.

Saving the baby’s life also brought tears to the eyes of the police officer. Mr. Hubbard was quoted as telling Kark 4 News channel, “I started kind of just bawling. It felt good to see how that turned out. Mentally I just broke down. I was crying, but it was happy tears.”

“Thank you so much for saving Grady’s life, we are grateful for you,” Mr. Chronister told Mr. Hubbard.

After the officer’s body camera video recording the incident was shared on the internet, the 23-year-old police officer was lauded by many in the comments who thanked and praised him for the service.

No Risk For Children Born To Mothers Given Flu Jabs During Pregnancy: Study

Opinion: Scindia, Now Prasada – So BJP Welcomes Dynasts, After All