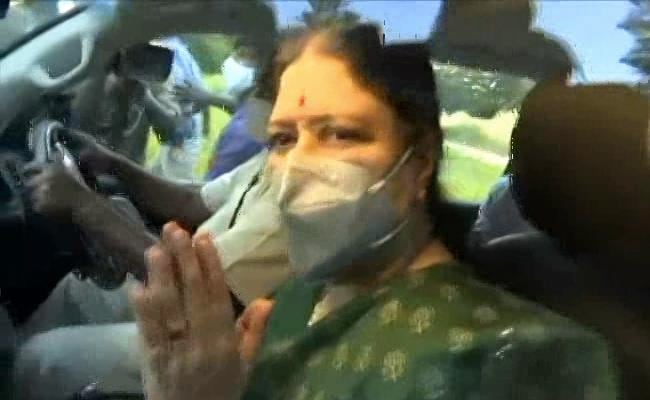 Fresh audio clips of VK Sasikala, the ousted chief of Tamil Nadu’s AIADMK, speaking to party functionaries and supporters sympathetic to her political return have surfaced, in which she can be heard saying “there is a need to lead the party in a fair way” and “we can’t be silent spectators”.

“I will come in after lockdown… ” Sasikala can also be heard, repeating what she was taped saying last week; she’d told a party worker: “Don’t worry. I will come after the pandemic is over.”

AIADMK leader D Jayakumar has slammed Sasikala for using “audio politics” to try and create confusion in the party’s ranks. She will never succeed in this, the former minister told news agency PTI, pointing out that Sasikala isn’t even a primary member of the party.

Another senior leader and former minister, KC Veeramani, said Sasikala was speaking to “some black sheep” and that the AIADMK’s interests were well-guarded by former Chief Ministers Edappadi K Palaniswami, or EPS, and O Panneerselvam, or OPS.

It was Sasikala who nurtured OPS, who is from her Thevar community. But after Jayalalithaa died, OPS rebelled against her when she attempted to become Chief Minister, and she gave EPS the top post when she had to go to jail after being convicted in the disproportionate assets case.

However, the two patched up while she was in jail and ousted her from the party.

Today’s audio clip is one of several that have been shared widely on social media over the past few weeks, with the sum total of the conversations sending mixed signals about Sasikala’s plans.

On Tuesday, in another clip, she was heard saying “I will come soon and set the party straight”.

“I have a responsibility. I am confident I will be able to set the party straight. My wish is the AIADMK should be strong… we will definitely bring Amma’s (former Chief Minister J Jayalalithaa) rule back. I will meet all of you soon,” she was heard saying.

“I am pained party workers are expelled when we are in opposition,” she also said.

That was a day after the AIADMK – which lost power after a heavy defeat in the April-May Assembly election – sacked 17 people; many had received calls from Sasikala recently.

Those sacked included an AIADMK leader who allegedly discussed OPS – who had rebelled against Sasikala after Jayalalithaa’s death – now joining forces with the ex-party chief.

Last week Sasikala was heard saying: “Don’t worry. I will come after the pandemic is over.”

EPS, who is the number two in the party, dismissed it as a chat with an AMMK worker.

Last week a source close to Sasikala told NDTV: “Chinamma is speaking to those supporters who wrote to her as she couldn’t write back since there were no courier services due to the lockdown.”

Sasikala – released from jail in January after a four-year term in a disproportionate assets case in which Jayalalithaa was the main accused – can’t contest polls for six years.

Though she nurtured hopes of entering active politics, she decided to stay away just before the election, after her attempts to woo leaders from the then-ruling AIADMK did not work out.

Many saw her move as a clever strategy to take control of the party if it – and it has indeed been beaten – suffered a rout in the polls.