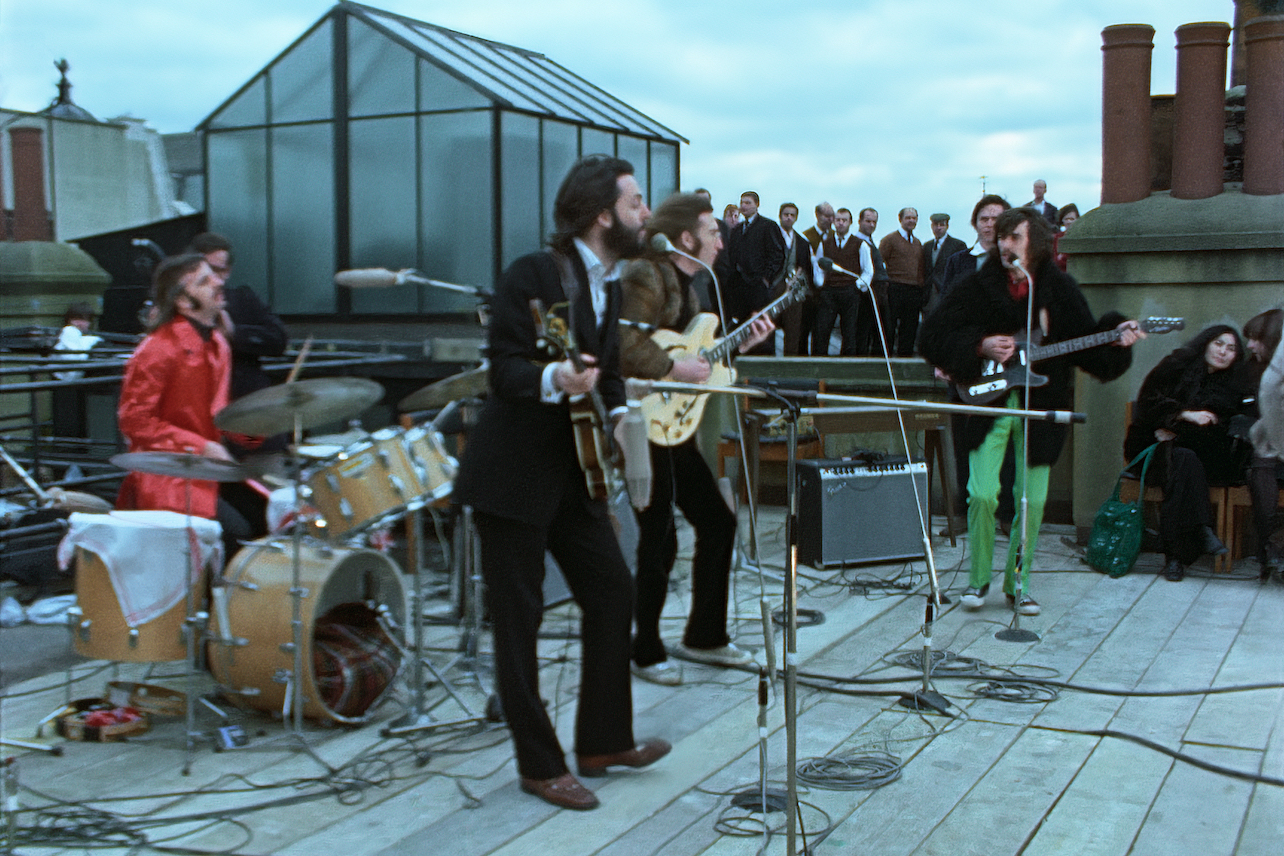 Peter Jackson has been nesting over the footage that’s become The Beatles: Get Back (Disney+) for so long that the idea of the Lord of the Rings director sequestered in a dark room poring over hours and hours of tape and sound has become meme-worthy shorthand for obsessive behavior. Now it’s hatched. Originally intended to be a feature film, Get Back appears in three episodes on the streamer over three consecutive nights, each topping 120 minutes in length.

The Beatles: Get Back: STREAM IT OR SKIP IT?

Opening Shot: A somewhat defensive disclaimer appears. “The Get Back project in January 1969 produced over 60 hours of film footage and more than 150 hours of audio recordings. Numerous editorial choices had to be made during the production of these films.”

The Gist: The Beatles: Get Back begins with a quick history of the band, signposts whipping by on the motorway: Liverpool, 1956; The Quarrymen; Hamburg, 1960; Cavern Club; Beatlemania, 1964; “The kingpins of the teenage set.” The Beatles have conquered the world, but by 1966 they’ve quit performing live and delved deeper into the recording studio. In 1967 Brian Epstein, their manager and guiding light, dies. And by 1969, they’ve been to India to meet Maharishi Mahesh Yogi, are managing themselves, and teetering on the edge of a breakup. And that’s where Get Back begins in earnest, with the sessions in January of that year at Twickenham Studios destined to become a documentary film and concert recording. None of that happened exactly the way it was supposed to, and now Peter Jackson has stepped in, commandeered the footage, and set the record straight. As he sees it.

The Beatles are tasked with writing and recording 14 new songs in a little over two weeks, but you wouldn’t know it from their level of concentration. Ringo often gazes at his bandmates in bemusement — “Somebody give me something to play” — John arrives late to every session and seems checked out from the start (“I’d say improvise it, man…”), and Paul wants to both take charge of the group’s songwriting process and find time for his own self-penned songs.

Still, there are moments that shine, and they begin with a strum and a mumble. Almost to himself, Paul plays some chords and fills in the lyrics with a melody line and gibberish. It starts again, and George and Ringo look on before adding hand claps and a little instrumental color. And before you know it, Paul is vibing on “Get back! Get back! Get back to where you once belonged.”

What Shows Will It Remind You Of? For Get Back, Peter Jackson applied the technical advancements in film restoration he employed on They Shall Not Grow Old, his riveting 2018 documentary about the First World War. But Jackson was also careful with this production not to re-create the shots for or otherwise mimic Let It Be, director Michael Lindsay-Hogg’s 1970 documentary project about the Beatles for which all of this footage was originally shot. Let It Be is set to be re-released in the wake of The Beatles: Get Back.

Our Take: As the first “episode” of The Beatles: Get Back unfolds (all three of them are longer than the average feature film), it’s clear that this thing is for the heads. Onscreen titles nudge the narrative here and there, but there’s no documentary-style narration, and definitely no contemporary interviews or historicizing from talking heads of today. Jackson has said he was making a “documentary of a documentary” with Get Back, but what it really feels like is the realization of any Beatles fan’s dream: to be a fly on the wall as the quartet writes songs, rehearses, and generally shoots the shit. A calendar graphic marks out the rehearsal days until the dates of the big show, and each one is filled with a considerable amount of instrumental noodling and fucking off, which will likely be just as fascinating to Beatles freaks as watching songs like the title track, “Two of Us,” “I’ve Got a Feeling,” “Maxwell’s Silver Hammer,” and “Don’t Let Me Down” evolve from skeletons to living, fully-formed musical things. “Lennon’s late again,” Ringo says as they gather for Day 4 of the sessions. “Thinking of getting rid of him.”

As the days count down to their concert special and their handlers clamor to focus their energies, it’s a trip to watch the members of the Beatles balance coasting with bursts of iconic genius. In the space of ten minutes, Get Back will incorporate a moment around the drum riser where the quartet will take up the formative material of a song that’s gone on to become utterly historic, and in the next feature Paul pushing back on John’s lethargy about learning the new material. “When I’m up against the wall, Paul, you’ll find I’m at my best.” We know the Beatles continued to have their troubles. But in Get Back at least, their genius as well as their foibles are in perfect harmony.

Sex and Skin: No longer the fresh-faced Liverpudians of less than nine years before, the 1969 Beatles are in leather vest and goose feather fur coat mode. Fully hirsute, their beards, mustaches and lank locks frame the quartet’s skin and features.

Parting Shot: “On Sunday, the four Beatles, along with Yoko and Linda, meet at Ringo’s house. The meeting does not go well.” That’s right, after a hectoring Paul and disengaged John have driven him into a diminished corner as both a band member and contributing songwriter, George Harrison quits the band as they break for lunch, and it’s up to the group to salvage the relationship.

Sleeper Star: George Harrison’s sartorial panache takes it. Whether the guitarist and songwriter is rocking a teal cowboy shirt with pearl snaps or burgundy cords alternating with a bunched turtleneck the color of a Yellow Submarine, he’s always channeling a look that thousands upon thousands of rockers have since adopted for themselves. And don’t forget the nattily-tied bandanna on the day he quits the band, accessorizing a sharp denim jacket.

Most Pilot-y Line: About an hour into the first episode of Get Back, the bickering that’s always been considered the throughline of this Beatles era begins to rear its bearded head. “It’s a matter of working it out with you while you work your bit out,” George snaps at Paul. “We need to be creative instead of being in the doldrums, which it always is. I mean, the Beatles have been in doldrums for at least…a year. Ever since Mr. Epstein passed away, it’s never been the same…”

Our Call: STREAM IT. The Beatles: Get Back is clearly a labor of love for director Peter Jackson, but it plays as one of the clearest forms of fan worship there ever was, letting the band members act and speak for themselves in a natural format true to even the smallest moments of this crucial period in their history.

Where to watch The Beatles: Get Back

Dwayne Johnson Gave His Own Truck To This Man. Here’s Why