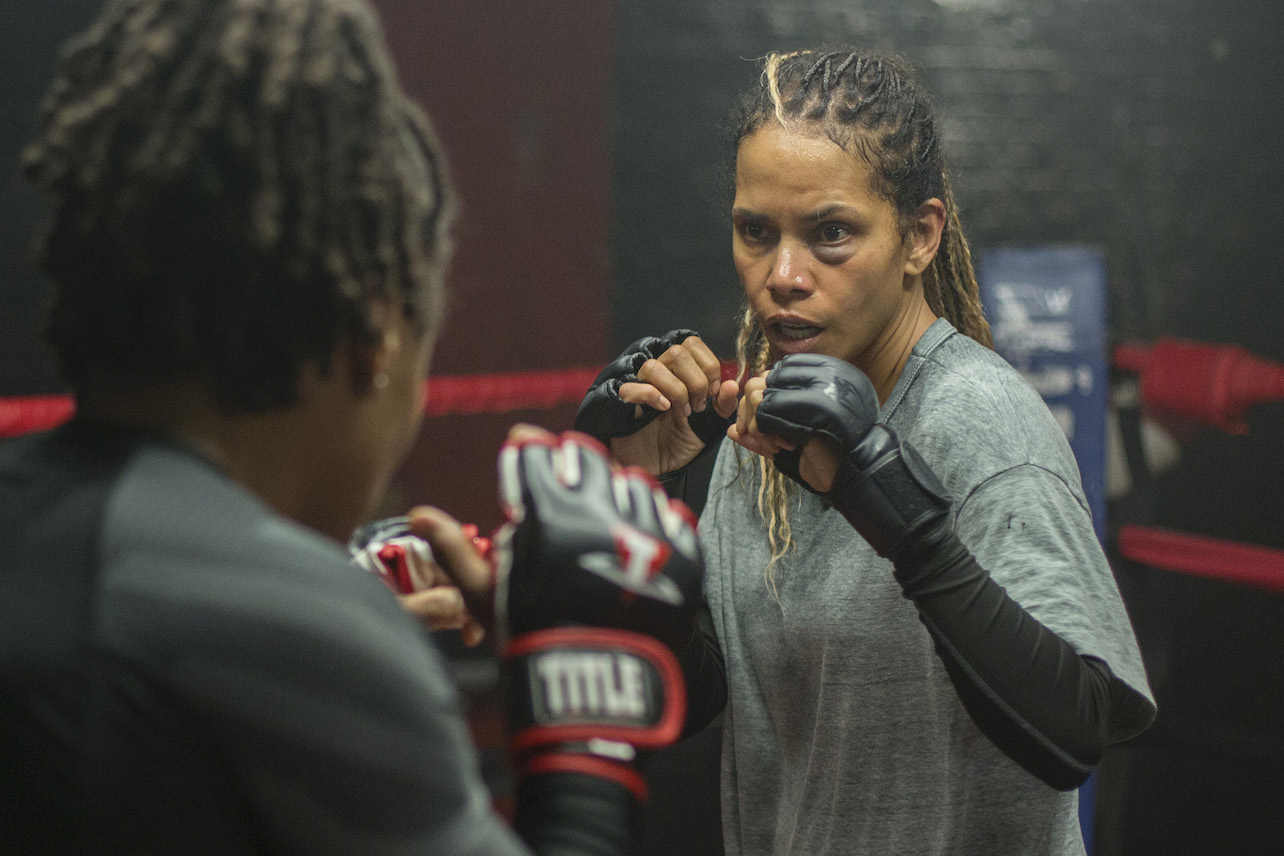 Netflix movie Bruised is notable for being the directorial debut of Halle Berry, who also stars, playing a mixed martial arts fighter who was on top of the world once and now finds herself at the bottom of it, where she hopes to maybe get back to somewhere in the middle of it. So yes, it’s an underdog sports movie among many before it and many sure to come, but the can-she-direct factor here is high — and there’s always hope that a fresh voice behind the camera will give us a fresh story.

‘BRUISED’: STREAM IT OR SKIP IT?

The Gist: We are in first person and we are getting our asses beat and then we are literally climbing out of the cage to escape. Next shot: Toilet POV. Jackie (Berry) scrubs it. That’s what she does now, four years after she was famous UFC fighter Jackie Justice ruined her career by forfeiting that fight. She went from 10-0 to zero and now it’s just booze booze booze. She lightly assaults a snotty rich kid after he films her while she’s changing clothes and she has a point, but it costs her the housekeeping job. She goes home where she hides booze bottles and also hides booze in a spray bottle for cleaning solution.

Jackie’s boyfriend Desi (Adan Canto) is also her manager and he’s a real piece of drunk abusive crap. He wants her to get back into the game because she’s still got it and she’s still angry. You won’t like her when she’s angry, which she proves while at an underground fight club, where she head-butts a brute twice her size into hamburger. Before she can head out, Immaculate (Shamier Anderson) gives her his card. He owns a gym and an MMA league, and he also thinks it’s time for Jackie Justice to give it a go again. She and Desi head home and her mother Angel (Adriane Lenox) is there, all weirded out on pills pills pills, with a kid kid kid by her side. He’s Jackie’s son son son, who she abandoned to his father as a baby. He’s Manny (Danny Boyd Jr.), he’s six, he doesn’t speak, ever, and he’s an orphan. Well, not anymore, because Jackie has to take him in or leave him on the stoop in the rain. Eventful night!

Jackie’s shellshocked like she just took a Superman punch. She sits on the toilet and smokes and decides it’s time to take up Immaculate on his offer, which leaves Desi at home with the kid. Jackie hoofs it to one of those urban gyms with lots of fluorescent lighting in nondescript brick buildings. Her head trainer is Buddhakan (Sheila Atim), who meditates a lot and gets to whipping her into shape, and if you’re worried there won’t be a Burgess Meredith in this movie, her other trainer is the good ‘n’ grizzled Pops (Stephen McKinley Henderson). Soon enough, Jackie participates in the old scene where the alcoholic impulsively dumps all her booze booze booze down the sink sink sink, and Immaculate sets her up with a big comeback fight against the current champ, dubbed Ladykiller (Valentina Shevchenko). Meanwhile, raising children and not being Jackie’s manager are Desi’s least-strong suits, so she grabs Manny and a couple of suitcases and heads out the door into chilly, wet Newark. Life goes on, bump bump bump, towards the fight of course, but what happens before that and what happens after that are just as important.

What Movies Will It Remind You Of?: Warrior, Million Dollar Baby, Rocky and about 100 other boxing movies that aren’t Raging Bull.

Performance Worth Watching: Berry does her best work in decades, but it’s Atim who gives Bruised its heart — and a calming presence that tempers the melodrama a bit.

Our Take: O Bruised, how do I not particularly love thee? Let me count the cliches: Underdog/comeback sports story. The booze/sink scene. The abusive significant other. The complicated relationship with the mother. The kid who won’t say a word. The inevitable scene in which the kid R-U-N-N-O-F-Ts. The family-drama arguments. The arrogant opponent in the ring. The training montages. The slo-mo the slo-mo the slo-mo. The grit, oh golly, the grit. The idea that it ain’t about whether she wins or loses, it’s how she grapples with the fighting metaphors — you know, just keep punching, get ’er on the ground and don’t let ’er up, stuff like that.

I don’t mean to be cynical — Bruised is a wholly watchable movie. It looks good, it feels authentic and the performances are earnest. You can’t fault Berry’s commitment, both in front of and behind the camera. She digs pretty deep to find the best Jackie among the onslaught of subplots she must battle, one at a time and one after the other after the other, like Bruce Lee to 30 foes: the crappy boyfriend, the crappy mom, the kid, the trainer, the other trainer, the manager, the addiction, the mental illness, a love story that feels tossed in at the last minute to spice things up. The film has some upside, in a string of scenes where Jackie doesn’t straight-up clock the people that goad her, which shows character progress with relative subtlety; in the relative de-emphasis of the fight itself as a crucial turning point in the plot (which is good, considering how underwhelming it is as an action sequence). Berry makes sure all this is moderately involving, but it’s hard to wholly invest in a story we’ve seen and heard so many times before.

Our Call: Bruised is often aggressively mediocre; a leaner, meaner edit would be more satisfying. But it’s well-intentioned and Berry’s sincerity is never in question. Lower your expectations and STREAM IT.

John Serba is a freelance writer and film critic based in Grand Rapids, Michigan. Read more of his work at johnserbaatlarge.com.