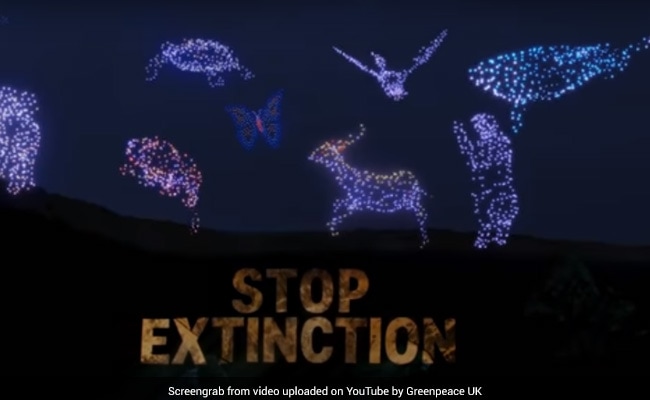 The video features all kinds of animals from a giant blue whale to a tiny yet important bee.

As world leaders gathered in Cornwall to attend the G7 summit, the environmental organisation Greenpeace UK sent out a message to tackle the climate crisis.

The campaign group released a film that showed 300 illuminated drones of endangered animals from all around the world descending on Cornwall. The video features all kinds of animals from a giant blue whale to a tiny yet important bee.

At the start of the film, a child narrator can be heard saying: “Once upon a time, world leaders gathered in Cornwall to decide our future… I hope it’s not too late, I hope the grown-ups in charge wake up… I hope they defend the forests for the animals and people living there”.

The video shows colourful animations and projections through illuminated drones as the animals start off their journey to Cornwall from natural locations around the world.

In the final moments of the video, all the animals come together over the cliffs in Cornwall and messages such as “Stop Extinction, Act Now” is seen in the sky.

The messages – “Stop Extinction” and “Act Now” – span up to 76 m in height and 122 m in length, according to the group’s official website.

The film’s background music was created by producer and Emmy-nominated composer Hannah Peel, who has scored music for film, theatre and television, including Game of Thrones. The music was recorded live in Belfast by the Ulster Orchestra.

Along with this, Greenpeace also highlighted that activists staged a protest to deliver a direct message to world leaders ahead of the first talks. In the last moments of the video, the activists unfurled a banner with the same message -“Act Now” as the US President’s plane is seen touching down in the UK.

“We need to see action, not just warm words, to tackle the climate and nature emergency,” Rebecca Newsom, head of politics for the environmental group, told AFP.

The G7 summit began formally on Friday as leaders of the world’s most advanced economies gathered on the Cornish coast for the first time since the outbreak of the global coronavirus pandemic.

The theme for this year’s G7 summit is “Build Back Better”.

(With inputs from agencies)