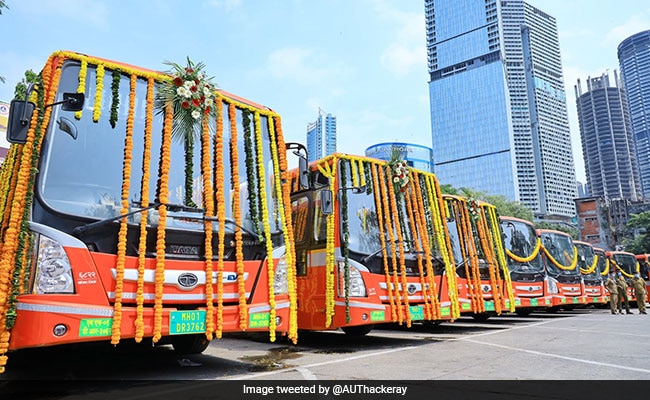 A point-to-point air-conditioned BEST bus service, launched recently in Mumbai by Maharashtra minister Aaditya Thackeray, has run into a controversy over the issue of its fares, which some passengers and activists have claimed to be “exorbitant”.

While officials of the Maharashtra Motor Vehicles Department told news agency PTI that the bus service fares have not been approved by the regulator- Mumbai Metropolitan Region Transport Authority (MMRTA), the BEST administration claimed its policy-making body has given it nod to the fares.

Today @ErikSolheim sir and I launched 60 electric buses from the Worli Depot in presence of Mayor Kishori Pednekar ji, @AfrozShah1 and @NorwayCGMumbai .
This completes our phase 1 of 386 electric buses and now we move towards phase 2 of 1900 electric buses for Mumbai (1/n) pic.twitter.com/mAYUyFQvun

According to BEST, passengers will have to pay Rs 75 for travelling from the city airport to Bandra-Kurla Complex (BKC), Rs 125 to Nehru Planetarium in Worli, Rs 150 to the Chhatrapati Shivaji Maharaj Terminus (CSMT) and Rs 175 to reach Hotel Trident and the Gateway of India in south Mumbai from the airport.

However, citizens, passenger activists and experts claimed the fares were “exorbitant” as compared to the normal BEST fares, which are in the range of Rs 5 to 20 for ordinary buses, and Rs 6 to Rs 25 for AC buses for similar distances.

State Transport Commissioner and MMRTA member Avinash Dhakane confirmed that the transport authority had not received any proposal about the bus service fare.

“Proposal about this was not put before the MMRTA,” Mr Dhakane told news agency Press Trust of India.

But, the BEST administration claimed that its committee, which is the policy-making body of the undertaking, had approved the fare of the point-to-point bus service, but it avoided comment on whether it got the MMTRA’s nod.

“The fare has received approval from the BEST committee,” a spokesperson of the undertaking said.

Despite repeated attempts, BEST General Manager Lokesh Chandra did not reply to queries on the issue.

A former official of the state Motor Vehicles department said unless the regulator clears the fare structure, which is prepared by public transport bodies approved by the MMRTA, it cannot be implemented.

A senior official of the Regional Transport Office (RTO) here, on condition of anonymity, claimed the fare structure was decided without the approval of MMRTA, and that prior sanction was mandatory before launching the new bus service.

AV Shenoy, a transport activist, said the service is a good initiative to help passengers travelling to and from the airport, but claimed that its fare structure cannot be implemented without MMRTA’s approval.

“The BEST is a stage carrier and governed by RTA (regional transport authority) regulations. Hence, it should take approval from the RTA regarding fares being charged for the services, which otherwise would not be as per the law,” Mr Shenoy said.

Some passengers also sought to know why the bus fares for the new service were high.
“Why so expensive? What additional facilities will be offered to justify the additional fare over normal AC routes? @myBESTBus @AUThackeray,” tweeted passenger Akshay Marathe.

Ravi Raja, leader of opposition in the Brihamumbai Municipal Corporation (BMC) and the Congress member of the BEST committee, claimed that implementation of the fare structure without the approval of MMRTA is a “blunder”.

“The BEST undertaking should have realised that this service is for the common man and not the elite class,” he said.

He claimed that under the leadership of Aaditya Thackeray, the Shiv Sena was trying to take BEST on the same “path of loss” where it has taken the ST (state-owned) bus services.

The BEST transport undertaking has been continuously running in losses, and it depends on its power distribution business for financial gains.

Earlier this month, the undertaking presented a deficit budget of Rs 2,236.48 crore for the transport vertical for FY23.

What BJP Hopes To Gain With New Savarkar vs Gandhi Claim