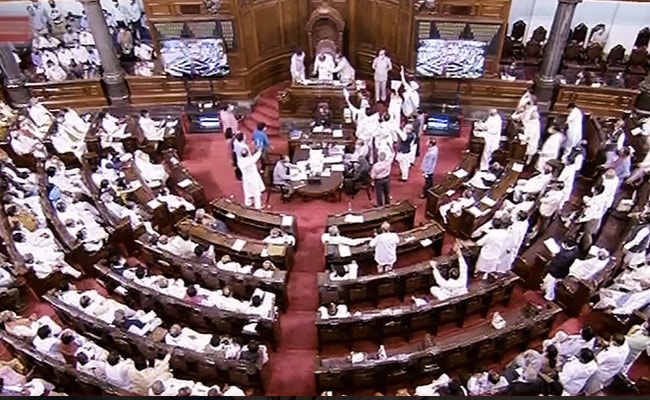 After a continued uproar by opposition members, the House was adjourned till 1 PM (File)

Rajya Sabha proceedings were adjourned twice during the pre-lunch period on Tuesday after uproar by opposition members over various issues including the Pegasus snooping issue.

The House was first adjourned for a few minutes after it met in the morning and then again soon after it met at 12 PM. Members of the Congress, TMC, left parties rushed to the well as the House reassembled at 12 and started raising slogans. They were also carrying placards with them.

Protesting members ignored the requests made by deputy chairman Harivansh to allow the Question Hour to function.

“Please go back to tour seats. Let the Question Hour continue. This is your time,” he said urging the members to return to their seats and allow the House to function.

After continued uproar and sloganeering by opposition members, he adjourned the House till 1 PM.

He said members of various parties had met the Chairman, who decided that the House will take up a discussion on COVID-19 at 1 PM.

Members of opposition parties, who had given as many as 15 notices under Rule 267 requiring setting aside of the business of the day to take up the issue they want to raise, raised slogans and rushed into the Well of the House, prompting chairman M Venkaiah Naidu to adjourn the proceedings till 12 noon.

The issues include alleged snooping of Opposition leaders, journalists and vocal critics of the government, fuel price rise and farmers’ agitation against new farm laws.

No sooner had the House condoled the death of a former member, Ramadhar Kashyap, members of Congress, TMC, Left and DMK were up on their feet raising various issues.

With the chairman disallowing all the 15 notices as he did for the 17 served on Monday, Anand Sharma of the Congress said either the Rule 267 should be removed or the Chairman should consider notices given under them as long as it is there in the rule book.

“These are issues of concern. We should not only read about it in newspapers or see on television,” he said.

Naidu said he agrees with Sharma. “There is a need for (rule) 267. I have been there in the House and I understand the problem of national security, something serious happens, you have to suspend the business and then take up that matter.”

But this provided the Chairman goes through the notice and then admits it, he said adding the notices given on Monday and Tuesday largely relate to “variety of issues… some of them ongoing for a long time, some of them discussed earlier.”

The Chairman said he had received 15 notices on various issues.

The Zero Hour is the time when members can raise issues on which they have given notices, he added.

But Opposition members were not convinced and started to rush to the Well as Naidu called for listed official papers to be laid on the table.

As they raised slogans, Naidu adjourned the proceedings.