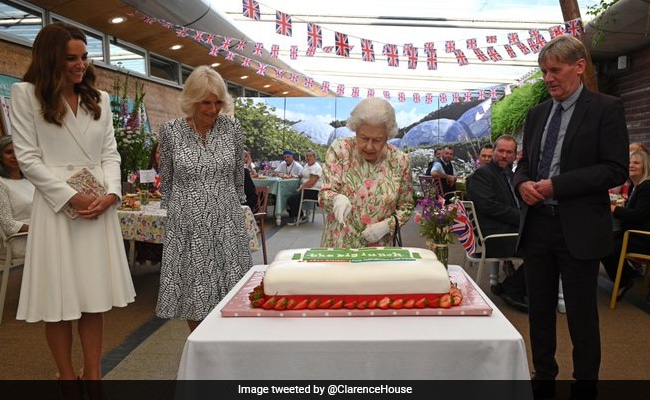 Queen Elizabeth was also invited to cut a cake to end the Big Lunch celebrations Saturday.

Britain’s Queen Elizabeth used a sword to cut a cake on Saturday, which marked her official birthday, on the sidelines of the G7 summit. The 95-year-old monarch remarked “this is something that is more unusual” when told a knife is available, according to videos on social media.

This was the Queen’s first official birthday since the death of her husband Prince Philip in April this year. Her actual birthday is April 21.

Queen Elizabeth used a ceremonial sword to cut a cake to mark the Big Lunch at the Eden Project complex on the sidelines of the G7 summit in Cornwall pic.twitter.com/6GjRbo5u2e

During the cake cutting ceremony at a Big Lunch get together in Cornwall, the Queen was told there is knife available, to which she replied “I know there is” and insisted on using the ceremonial sword. “This is something that is more unusual,” she was heard saying as she went on to cut the cake.

The video evoked laughter both at the venue on Twitter.

“Her Majesty and Their Royal Highnesses met inspiring local volunteers, thanking them for their efforts throughout the pandemic,” said a post by the official Twitter handle of The Prince of Wales and The Duchess of Cornwall.

Her Majesty and Their Royal Highnesses met inspiring local volunteers, thanking them for their efforts throughout the pandemic. pic.twitter.com/Mk5lRXDtwC

— The Prince of Wales and The Duchess of Cornwall (@ClarenceHouse) June 11, 2021

“The Duchess of Cornwall is Patron of The Big Lunch – an initiative that encourages people to come together to share food and friendship and make new connections. The Big Jubilee Lunch will form part of The Queen’s Platinum Jubilee Celebrations!” they said.

Earlier in the day, she viewed a military ceremony at Windsor Castle. She was accompanied by her cousin Prince Edward, Duke of Kent, at the ‘Trooping the Colour’ ceremony, according to Reuters.

During the ‘Trooping the Colour’ ceremony, soldiers wearing their scarlet uniforms and tall bearskin hats parade through central London, the report said. But the ceremony had been scaled down over the last two years in view of the COVID-19 pandemic.

(With inputs from Reuters)