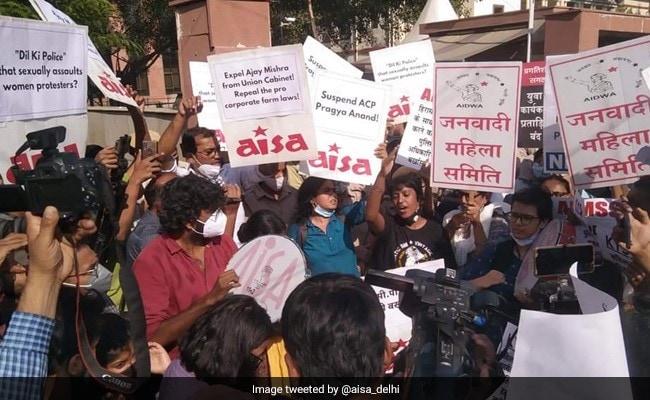 Around 60 activists gathered outside the police headquarters and raised slogans against the force.

Various civil society groups on Wednesday protested outside the Delhi Police headquarters against the alleged sexual assault of two women students by police personnel during a recent protest, prompting the force to set up a panel to probe the claims.

The Left-affiliated All India Students’ Association (AISA) had on Tuesday alleged that two women students were sexually assaulted by Delhi Police personnel while they were protesting outside Union Home Minister Amit Shah’s residence in New Delhi on October 10.

The allegations were rejected by the police as “totally baseless”. One of the protesters, who was allegedly assaulted, said they had demonstrated outside Shah’s residence on Sunday over the Lakhimpur Kheri incident.

“I was one of the two protesters assaulted that day. Police manhandled and abused us. We demand strict action against those involved in the incident,” she said.

On Wednesday, around 60 activists gathered outside the police headquarters at Ashoka Road and raised slogans against the force. They demanded that the Chanakyapuri ACP be sacked for allegedly instructing police personnel to assault women protesters.

United Citizens Protest at Delhi Police Headquarters against the Horrible Sexual Assault in Custody by Delhi Police on Women Protesting against Lakhimpur Kheri Massacre of Farmers Outside Home Minister’s House!

Members of AISA were detained on Sunday as they staged the protest near Mr Shah’s residence demanding the expulsion of MoS Ajay Mishra over the October 3 Lakhimpur Kheri violence in which Mishra’s son is accused of mowing down four farmers with his vehicle.

The protesters were immediately detained and forcibly removed by the Delhi Police, the AISA said in a statement, adding that the women protesters were targeted separately.

Kavita Krishnan, national secretary, All India Progressive Women’s Association said they have met senior police officials and the police assured them of a vigilance inquiry.

“Today, several women organisations came here to protest the assault that took place to some protesters who were protesting outside the home minister’s house demanding the sacking of Ajay Mishra. Two women students were assaulted by the Delhi police personnel and we are very angry about this.

Deputy Commissioner of Police (New Delhi) Deepak Yadav confirmed that the allegations will be probed.

N Sai Balaji, national president, AISA said, “We have some demands regarding the way the police behaved with the agitators during the detention while they were protesting near Shah’s residence. First, the Delhi Police should acknowledge this atrocity instead of denying it. They should also take action against those who were involved in the incident.”

Some Act Should Be Attributed To Person In Road Accident To Prove Negligence: Supreme Court

Coal Shortage Created By Some With Vested Interests: Trade Unions