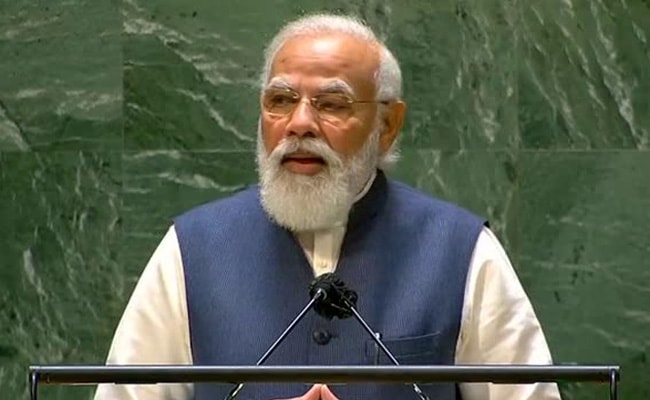 PM Modi said that today, all kinds of questions have been raised about the UN. (FILE)

The UN must improve its effectiveness and enhance its reliability if it wants to remain relevant, Prime Minister Narendra Modi said on Saturday, as he highlighted several recent events, including the World Bank scrapping its ease of doing business report over alleged irregularities in China data, that questioned the credibility of the various world institutions.

Addressing the 76th session UN General Assembly, the Prime Minister quoted great Indian diplomat Chanakya’s words “when the right action is not taken at the right time, then it is time itself that causes the action to fail” to push his point.

“If the United Nations wants to remain relevant. It will need to improve its effectiveness and enhance its reliability,” he said.

PM Modi said that today, all kinds of questions have been raised about the UN.

“We have seen such questions being raised, related to the climate crisis and during the COVID-19 pandemic,” he said.

The WHO, the UN’s health agency, has faced criticism since the Covid-19 outbreak first surfaced in China in December 2019.

WHO faced criticism that it was mishandling the crisis.

Former US president Donald Trump slammed the WHO as a “puppet” of China and accused it of covering up the start of the outbreak and allowing the virus to spread around the entire world.

“The proxy war going on in many parts of the world, terrorism and the recent crisis in Afghanistan have further highlighted the seriousness of these questions,” the Prime Minister said.

“With regard to the origin of COVID-19 and the ease of doing business rankings, institutions of global governance have damaged the credibility they had built after decades of hard work,” he said.

The decision was taken after a probe of data irregularities allegedly due to pressure by some top bank officials to boost China’s ranking in 2017 came to light.

The World Bank said in a statement that the decision came after internal audit reports had raised “ethical matters, including the conduct of former Board officials as well as current and/or former Bank staff” and a board investigation conducted by the law firm WilmerHale.

The WilmerHale report cited “direct and indirect pressure” from senior staff in the office of then-World Bank President Jim Yong Kim to change the report’s methodology to boost China’s score.

Centre Did Not Let Me To Go To Rome Global Peace Meet Out Of “Jealousy”: Mamata Banerjee