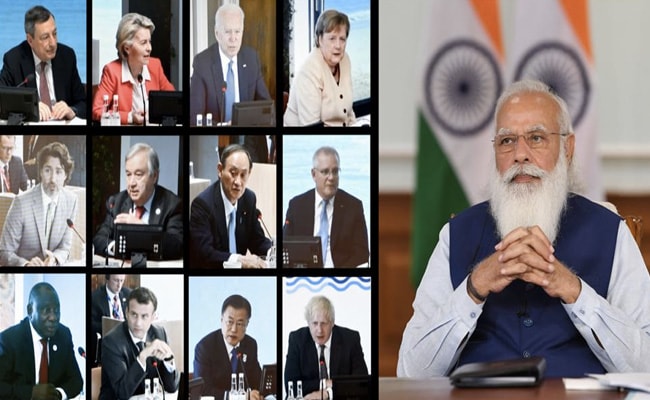 At the G7 Summit, PM Modi said democracy and freedom were part of India’s civilisational ethos.

India today advocated global solidarity and open democratic societies to tackle challenges like health, climate change, and economic recovery. Prime Minister Narendra Modi’s message of worldwide unity was well received at the Outreach Sessions of the G7 Summit, which reaffirmed the need to embrace “values that bind us together” like respect for international rules and norms.

PM Modi took part virtually in two sessions on the second day of the summit today.

Addressing the session ‘Building Back Together – Open Societies and Economies’ as the lead speaker, he recalled that democracy and freedom were a part of India’s civilisational ethos. He stressed the need to ensure that cyberspace remains an avenue for advancing democratic values and not of subverting it, according to a statement released by the government of India.

His comments came amid a heated and ongoing debate in India over alleged curbing of free speech.

Was happy to address the @G7 Session on Open Societies as a Lead Speaker. Democracy and freedom are part of India’s civilizational ethos, and find expression in the vibrancy and diversity of India’s society. https://t.co/Tjw5vPcGxr

He stressed that India was the only G-20 country on track to meet its Paris commitments.

The G7 Summit, which this year included countries like India, the Republic of Korea, and South Africa, besides the main members of the grouping, released a joint statement reaffirming their shared belief in open societies, democratic values, and multilateralism.

“As leaders of over half of the world’s population living in democracies, we believe it is imperative that we reaffirm and encourage others to embrace the values that bind us together, including our respect for international rules and norms,” the statement said.

These related to human rights, democracy, social inclusion, gender equality, free speech, the rule of law, a transparent multilateral system, and the importance of civic space.