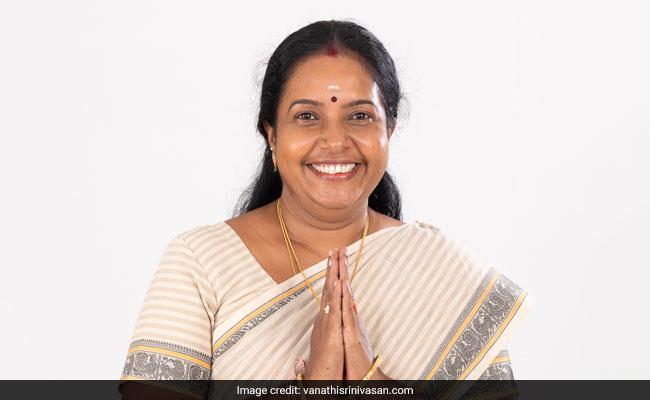 When BJP fielded Vanathi Srinivasan as its candidate for the Coimbatore South assembly seat in Tamil Nadu, the party was betting on a dedicated worker who was also popular among the masses. Ms Srinivasan had a huge challenge ahead of her as the BJP had not been able to win this constituency in the last 10 years. An advocate by profession, Ms Srinivasan, 50, is the national head of the party’s women’s wing and a former member of the Akhil Bharatiya Vidyarthi Parishad (ABVP).

The BJP leader is well-known among the Coimbatore South constituents for her positive messaging. During the poll campaign, she had promised the people free wi-fi service, a jewellery institute and geographical indication tag for jewellery manufactured in Coimbatore, and a multi-storey car parking lot to ease the congestion in the market area. The parking area, in particular, is a priority for voters in the constituency that is popularly known as the “Manchester of South India”. And things were looking up for her, at least until Kamal Haasan of Makkal Needhi Maiam (MNM) and Mayura S Jayakumar of Congress announced that they were joining the fray to fight for the seat.

The Coimbatore South constituency was created after the 2008 delimitation exercise and AIADMK candidates have won from here in the last two elections. In 2016, Ms Srinivasan finished a close third with 21.57 percent of the vote share, and her innovative campaign strategies – which included “Coffee with Vanathi” and “Ask Vanathi” – won her a lot of praise.

She joined the BJP in 1993, five years after becoming an active member of the ABVP. In 2017, BJP used her to reach out to AIADMK Chief Minister Edapaddi K Palaniswami during the peak of the political crisis in the state.

According to her website, Ms Srinivasan was born on June 6 in 1970 into an agricultural family and received her primary education in Coimbatore. She began practising law at Chennai High Court in 1993. In October 2020, she was made the National Chief of BJP’s Mahila Morcha. Ms Srinivasan is the first woman from south India to be appointed as the chief of the women’s wing.