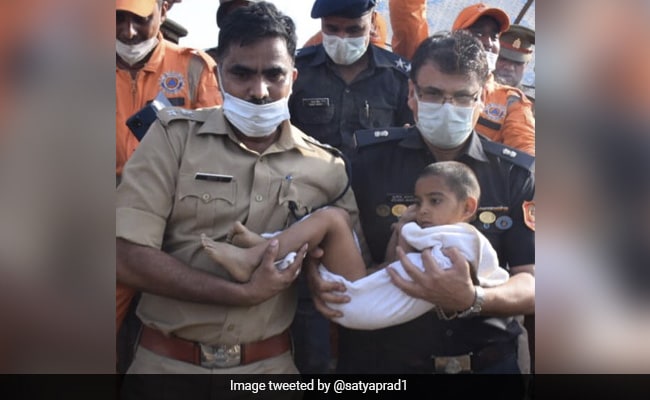 Shiva, a resident of Dhariyai village in Agra, has been admitted to a hospital after the rescue.

The National Disaster Response Force (NDRF) today appealed to state governments and district authorities to “strictly regulate” open borewells in their areas and punish those who flout the rules and endanger innocent lives.

NDRF Director General S N Pradhan said this on his official Twitter handle after a three-year-old boy, who got stuck in a 100 ft deep borewell in Agra, was rescued after an about eight-hour-long operation by rescuers from multiple agencies, including the central contingency force, the Uttar Pradesh state disaster response force and the Army.

Mr Pradhan said he appeals to all state governments, district and local administration to strictly regulate all open borewells and punish those who flout rules and endanger innocent lives.

He added that even the relatives of the victims should not be spared if they are found guilty of leaving the borewells uncovered or unattended.

Shiva, a resident of Dhariyai village in Agra, was admitted to a local hospital after he was rescued from the borewell that was dug in the land belonging to the child’s family.

The borewell was dug about six-seven years back and was opened temporarily as the family of the child had begun drilling a new borewell a couple of days ago, Agra Senior Superintendent of Police (SSP) Muniraj G told PTI.

The child accidentally fell into the borewell around 7.30 am while he was playing near it.

“During the rescue process, oxygen and some food items were provided to the child with the help of pipeline and rope.”

“A camera was also lowered into the hole for constant monitoring of the child. Finally, he was rescued at 4:55 pm,” an NDRF spokesperson said.