Home News Meet Javed Khan, The Good Samaritan From Bhopal, Who Turned His Autorickshaw Into Ambulance To Ferry Covid Patients 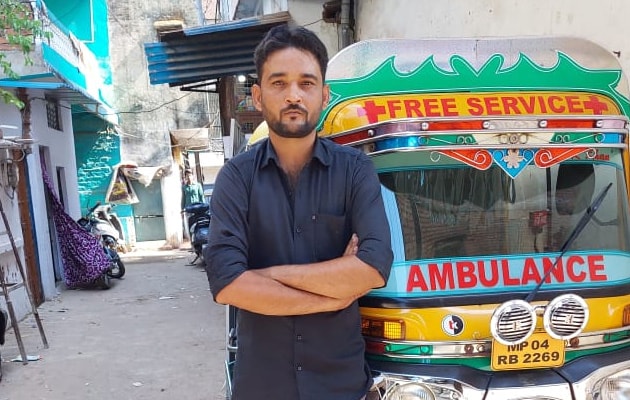 Javed Khan sold his wife’s gold necklace to invest money in converting his auto into an ambulance.

A 34-year-old autorickshaw driver in Madhya Pradesh’s capital Bhopal turned his bread-winning vehicle into a free 24×7 ambulance service. The three-wheeler was transformed and equipped with an oxygen cylinder, hand-sanitiser, Personal Protection Equipment (PPE) kit and an oximeter.

Javed Khan, before the pandemic, was just another autorickshaw driver. But then, he saw how the pandemic left people stranded for medical help, especially the poor who often carried their Covid-hit family members on their backs to the hospitals, as they could not afford an ambulance. Mr Khan, a father of three children, decided to sell his wife’s gold necklace to invest the money in converting his autorickshaw into an ambulance.

“I saw on social media and news channels how people were being carried to hospitals due to the shortage of ambulances. So, I thought we should come forward for the sake of humanity, I sold my wife’s locket and arranged a cylinder and converted my auto into an ambulance.”

He started ferrying patients for free, despite the fact that he had a family to feed and additionally, was supporting his two brothers who were daily wage earners and had no source of income in the lockdown. Once his auto-cum-ambulance was equipped, a doctor taught Mr Khan how to use the equipment and a donor further helped with procuring another oxygen cylinder and an oximeter.

One of the people who availed the auto-ambulance service, Jabeer Khan, said that Javed Khan refused to take any money for his services, “The ambulance was busy and taking time to come. Meanwhile, I got his number and called him. He came within minutes. It was like an ambulance, from oxygen cylinder to oximeter, everything was there … I can say humanity is not dead.”

At a time when there was shortage of oxygen and beds, crematoriums and burial grounds were struggling to cope with the sheer number of dead bodies and the healthcare system was stretched to the breaking point, people like Javed Khan did more than just provide a service, they helped restore faith in humanity.