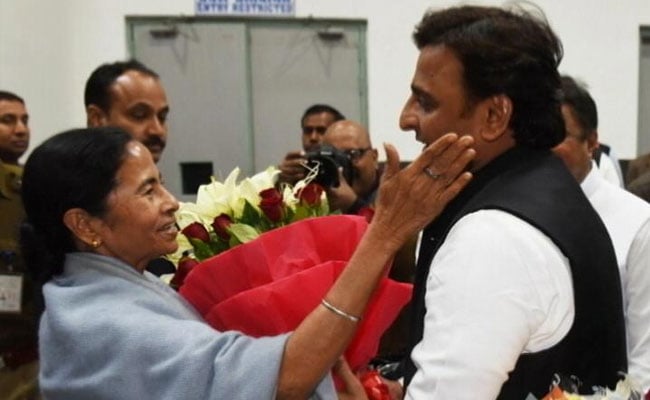 Uttar Pradesh is not the immediate focus of the Trinamool, Laliteshpati Tripathi said. (File)

Trinamool Congress president Mamata Banerjee is expected to visit Varanasi next month amid indication that her party will support Akhilesh Yadav’s Samajwadi Party in the upcoming Uttar Pradesh Assembly polls.

“Didi has already said in Delhi that if Akhilesh Yadav needs our help, we are ready to extend help. The gesture of senior SP leader Jaya Bachchan seeking votes for the TMC during the West Bengal Assembly elections will be reciprocated in Uttar Pradesh,” said Laliteshpati Tripathi, who recently joined the Trinamool.

“The target is the same and we have to leave no stone unturned to ensure that these forces (led by the BJP) are defeated. We are also with SP chief Akhilesh ji in his fight,” Mr Tripathi told PTI on Sunday.

He said Ms Banerjee would visit Varanasi probably around the second week of January.

“The TMC is holding meetings and deliberating how to strengthen itself in Uttar Pradesh. As far as party chief Mamata Banerjee’s visit to Varanasi is concerned, we have not finalised the dates. We were planning to organise her visit in December, but owing to her previous engagements, we could not get the dates,” Mr Tripathi said.

Asked whether Ms Banerjee is visiting Varanasi since it is represented by PM Narendra Modi in the Lok Sabha, and possibly because she wants to send across a message, Mr Tripathi said, “No. According to the initial roadmap of the TMC, the party’s Purvanchal unit office was to be based in Varanasi, and Mamata ji wanted to have a darshan (of temples).”

Mr Tripathi also reasoned that she chose Varanasi as the first phase of the joining of new members in the Trinamool was to be held in the holy city.

Laliteshpati Tripathi, ex-vice president of the state Congress and great-grandson of former Uttar Pradesh chief minister Kamlapati Tripathi, and his father Rajeshpathi joined the Trinamool in the presence of Ms Banerjee in Siliguri on October 25.

Asked what made him and his father join the Trinamool, the 43-year-old-leader said Ms Banerjee has the capacity to fight Prime Minister Modi.

Meanwhile, SP’s national vice-president Kiranmoy Nanda told PTI Sunday, “We have supported her (Mamata Banerjee) in the West Bengal Assembly elections. I myself have campaigned for her in the elections.”

When asked as to how he views Congress general secretary Priyanka Gandhi Vadra, who is trying to mobilise the party cadre (ahead of the polls), Laliteshpati Tripathi said, “Politics is not a game, which is started two-three months before the elections. If I take the example of Mamata Banerjee, she fought the Communists in the state continuously for three-four years by being there. The Congress, too, needs the same thing”.

“The Congress seems to be fighting now, and for the candidates it is good that the star campaigners are active. Whosoever can take advantage of it, will do so. But, as far as the revival of the party is concerned, it should have been started in 2019,” he said.

Commenting on the announcement made by Priyanka Gandhi that the Congress will give 40 per cent of tickets in Uttar Pradesh Assembly polls to women, and whether it could be possibly a game changer, Mr Tripathi said, “If this was to be made a game changer, this should have been introduced in states like Uttarakhand, Goa and Punjab, where they could have guaranteed the win of their candidates, and it could have been a strong initiative towards women empowerment.

“This is a welcome move, but based on it alone, you cannot win the polls as there are a host of other factors,” he said.

“Didi has shown that she can take on Narendra Modi and defeat him as well,” Mr Tripathi said and added that the 2022 Uttar Pradesh Assembly election has become Akhilesh Yadav versus Yogi Adityanath.

“If Akhilesh is seen on a strong footing, then the prime minister would have to come here and lead the (BJP’s poll) campaign,” Mr Tripathi said.

Mr Tripathi claimed that BJP’s tally of seats in the 2022 Assembly elections will decrease from its 2017 total of 312, as there is “anger in the society, farmers are worried in absence of proper purchase of paddy and due to non-availability of fertilisers”.

He also claimed that the BJP will lose seats in the rural areas of Varanasi in the Assembly polls.

Mr Tripathi said that he and his father have not taken any designation in the Trinamool and are working to strengthen it in the state.

Congress Will Sit In Opposition For Next 25 Years: B S Yediyurappa