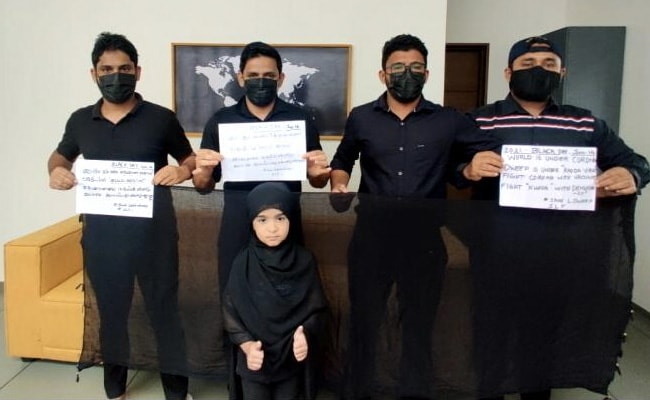 Hundreds of Lakshadweep’s natives — families and leaders — are observing a Black Flag protest today as their new Administrator Praful Khoda Patel arrived in the island group. This is the first time he has gone there since his sweeping reforms, some of them proposed, sparked outrage in the Union Territory and in neighbouring Kerala some weeks ago.

Amid a lockdown, locals raised black flags at home, while many wore black masks or badges.

The protest was organised by the All-Party Save Lakshadweep Forum. This happened days after another protest against the alleged “anti-people and anti-democratic” draft orders of the Administrator.

“All people of Lakshadweep are united, irrespective of political leanings,” said one such protester, remaining unidentified.

In a Facebook post, Lakshadweep film-maker and activist Aisha Sultana displayed her photo in black attire and mask. Her post said: “No longer will we, the people of Lakshadweep, tolerate fascism.”

Ms Sultana has been booked for sedition and hate speech over her “bio-weapon” remark against the Central government made during a television news panel discussion.

The filmmaker has since moved the Kerala High Court saying she has been “falsely implicated in the case with ulterior motives”. The intent behind her comments was to expose the state’s apathetic approach, he has said.

“There is no case that the statement of the applicant created disaffection towards the government or that there was imminent violence sparked by the words,” her plea says.

She has sought anticipatory bail even as Lakshadweep’s Kavaratti police have asked her to report at the station on June 20.

Mr Patel is yet to respond to the allegations. Several office bearers of the BJP’s wing in the island group have since resigned from the party’s membership.

In his own Facebook post, the Administrator shared some photographs showing his arrival in Lakshadweep. “Reached Agatti of Lakshadweep today and met officers. Discussed with officials the speed of development here,” he wrote in Gujarati.

Strong Immunity, Better Heart Health And Other Reasons To Add These Leaves To Your Diet