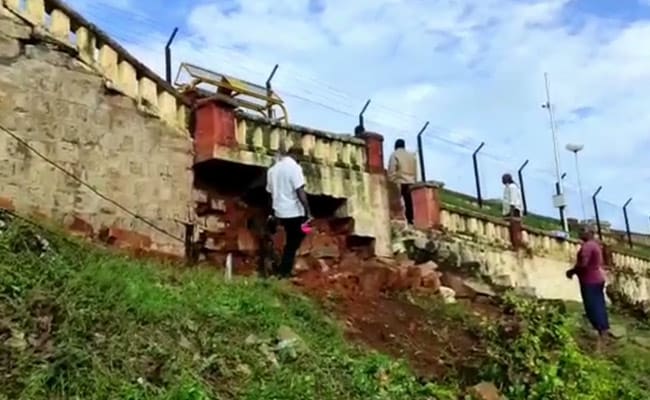 A portion of the wall near the steps leading down to the Brindavan Gardens has collapsed.

A portion of the Krishnarajasagara dam in Karnataka’s Mandya district has suffered damage, but authorities say that it has not affected the safety of the structure.

A portion of the wall near the steps leading down from the dam to the renowned Brindavan Gardens has collapsed. The damage has taken place at a time when the state is receiving heavy rain.

The Krishnarajasagara dam stores water from the river Cauvery and provides water for drinking and irrigation to many areas, including the Bengaluru city.

The dam and concerns regarding its stability have been in the news of late owing to the ongoing war of words between Mandya MP Sumalatha Ambareesh and JDS leader and former CM H D Kumaraswamy.

The public spat began when the Independent MP said illegal mining activity was a threat to the stability of the dam and demanded a CBI probe into the matter.

In response, the JD(S), which holds considerable influence in the region, alleged that the mining activity began when the late Ambareesh, former MP from Mandya and Sumalatha Ambareesh’s husband, was at the helm of affairs in the district.

Party leader Kumaraswamy, too, made personal remarks on the Independent MP, who defeated his son in the 2019 Lok Sabha election.

Hitting back, the Independent MP has dared JD(S) leaders to present evidence to support their allegations and also said that the strong reaction by JDS MLAs suggests that they are benefiting from the illegal mining.

Sumalatha Ambareesh has also said that she will raise in Parliament the issue of illegal mining near the Krishnarajasagara dam, like she has done in the past. She has said her fight is not against H D Kumaraswamy but against the “inconvenience” due to mining in the district.