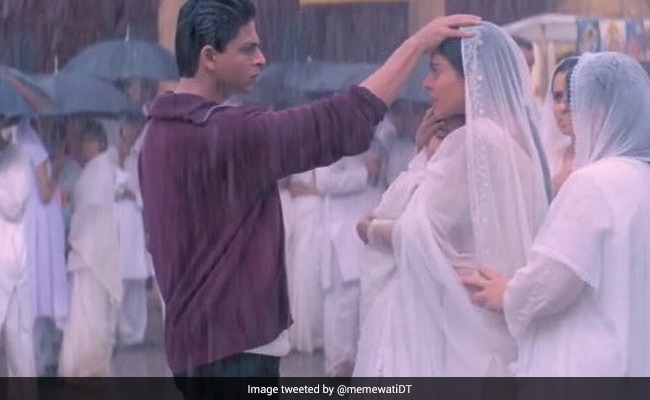 When Karan Johar’s Kabhi Khushi Kabhie Gham released in 2001, the movie became a rage. Shot on a lavish scale, it gave moviegoers a rare window to the lives of uber-rich families. From Shah Rukh Khan playing the role of the charming Rahul to Kajol owning the character of the fun-loving Anjali, Kabhi Khushi Kabhie Gham, or K3G as it is popularly known, had all the ingredients of a mega-blockbuster. Twenty years later, people still refer to the movie when they have to make a point rather dramatically.

Now, one particular scene from the film has become meme material on Twitter — one where Rahul impulsively decides to marry Anjali after the death of her father, knowing very well that his own father won’t approve of the match. Amid a heavy downpour, Rahul puts his hand over Anjali’s head to reassure her that he would keep his word, no matter what.

Twitter users have taken the scene to a completely different level and made the image viral with captions that describe awkward and funny situations that people often find themselves in.

One user shared the image and likened Rahul to “Indian moms” checking the temperature of their children when they have fever.

Another user found it similar to “Jaadu” giving his powers to Rohit. Here, Jaadu is of course the extra-terrestrial creature from the 2003 movie Koi… Mil Gaya, who is left behind on Earth by his alien family by mistake.

A third user said the way Rahul kept his hand on Anjali’s head reminded her of people placing their hands on the “dhakkan” of a mixer grinder while grinding masala.

when she says she prefers Dal makhani over pizza. pic.twitter.com/veIQ3mxqmf

when she chooses water over Coca-Cola pic.twitter.com/hI0q1tyTPd

When she’s into test cricket pic.twitter.com/MgrhhjOmY7

In the movie, Rahul was banished by his father — essayed with utmost precision by Amitabh Bachchan — after he married Anjali. His younger brother, Rohan, played by Hrithik Roshan, set out to unite the family years later.