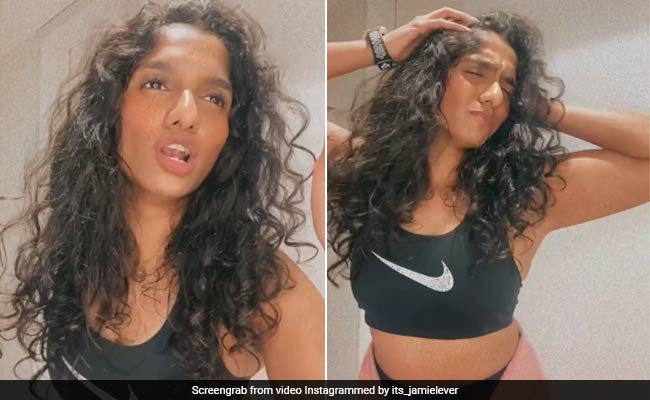 Actor and comedian par excellence Johny Lever has graced the silver screen for many years, giving us plenty to laugh about. Be it his lively antics or comical one-liners with funny expressions and body language, he has been the reigning king of laughter for a while now. And his daughter, Jamie Lever is no less of a delight. Time and again our Instagram feeds have been blessed by her hilarious videos and Instagram Reels. Her Instagram Reels video, today, an excellent example of a funny video, also has her fans rolling on the floor. Laughing, of course.

Jamie Lever’s video shows her as a desi version of Colombian singer Shakira. In the video, the multitalented Ms. Lever is seen singing and dancing to a parody version of Shakira’s hit song Hips Don’t Lie, where she swapped the original lyrics with a hilarious verse on the lines of her wanting to eat aloo sabzi and rogan josh.

In the chorus, she sings, “Oh baby when you eat like that, you make a woman go mad, thoda sa fried rice and chilli prawn (a bit of fried rice and chili prawn), come on, put it into my body,” all the while showing off her moves and complementing it with humorous expressions.

Our favourite part, however, is the short but absolutely hilarious cameo by actor and Ms. Lever’s brother Jesse. Needless to say, the siblings have left us in splits with their Instagram Reels.

In just six hours, Ms. Lever’s video raked up nearly 32,000 likes and innumerable comments from fans who were all in awe of the parody, both in terms of her lyrics as well as how she performed.

Some others marvelled at how multitalented Ms. Lever was, singing, dancing and making people laugh all at the same time, and excellently so. “How can you be so good at everything you do!!! And your brother!!!” the user said.

Some fans commented how they prefer their “desi Shakira” over the original pop star.

One fan even said it seemed as though Ms. Lever was channelling singer Usha Uthup and her style of singing because they could easily imagine these parody lyrics sounding amazing in Ms. Uthup’s voice.

There never was any doubt about how multi-talented the Lever siblings were. This Instagram Reels, which left us laughing till our stomachs hurt, only cemented in our minds our love for the siblings.

What are your thoughts on Ms. Lever’s parody? Let us know in the comments.