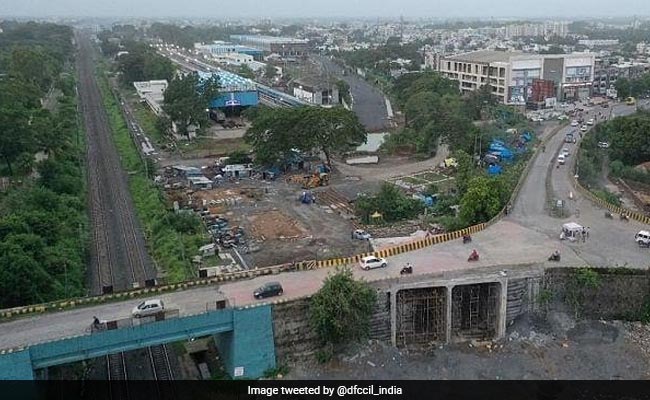 Railways has completed construction of Valsad Road Over Bridge on Western Dedicated Corridor.

In a record time of 20 days, the Indian Railways has completed the construction of Valsad Road Over Bridge (ROB) on the Western Dedicated Freight Corridor (WDFC) in Gujarat.

According to the Ministry of Railways, the work of dismantling and reconstruction was undertaken by Indian Railways’ PSU, Dedicated Freight Corridor Corporation of India (DFCCIL).

Working in tandem with various government agencies and the civil administration, the ROB which funnels busy traffic into Valsad ROB from the Mumbai-Delhi highway, a 20 day traffic block was secured on June 2 this year for dealing with this challenge.

The Western Corridor connecting Dadri in Uttar Pradesh to Jawaharlal Nehru Port (JNPT) in Mumbai will traverse through the states of Uttar Pradesh, Haryana, Rajasthan, Gujarat and Maharashtra of WDFC and Eastern Dedicated Freight Corridor (EDFC).

WDFC’s 306 km Rewari – Madar section was dedicated to the nation on January 7 this year. Trial run of 369 km of WDFC between New Palanpur to New Kishangarh has been done. EDFC’s 351 km New Bhaupur – New Khurja section and the Operation Control Centre at Prayagraj were dedicated to the nation by the Prime Minister on December 29, 2020. A total of approximately 2800 route km of the whole WDFC and EDFC (excluding the Sonnagar – Dankuni PPP section) will be commissioned by June 2022, the Ministry said.

In the commissioned sections, a total of more than 4000 trains have been run. In Eastern DFC, it has more than 3000 trains and in WDFC more than 1000 trains. Total GTKM has crossed the 3 million ton mark. Some of the trains in the section are achieving an average speed of 99.38 kmph in EDFC and 92 kmph in WDFC. These speeds are comparable to any of the fastest mail express trains, as per the Ministry.

WHO “Concerned” About Eased Virus Curbs Around Euro 2020