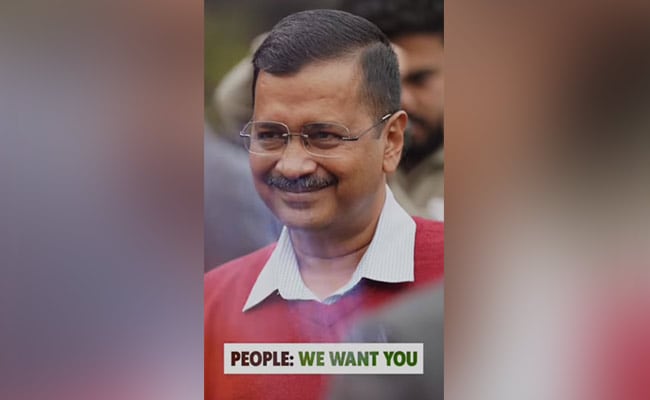 From slogans to songs, the Aam Aadmi Party (AAP) is leaving no stone unturned as it tries to emerge as a formidable force on the national stage.

Stepping up its social media push, the AAP is now trying a quirky way to reach out to youngsters through Instagram Reels, which has millennials hooked after the government banned the popular TikTok platform.

The post starts with a picture of Congress leader Rahul Gandhi as the lyrics in the background asks, “You want me?” and then, “People: No” flashes on the screen, indicating that the country does not want Mr Gandhi as its leader.

This is repeated with a picture of Prime Minister Narendra Modi.

A picture of AAP convener and Delhi Chief Minister Arvind Kejriwal comes next, the lyrics says, “We want you” with “People: We Want You” flashing on the screen.

This is followed by clips of the Delhi Chief Minister at public events in which he is seen waving at the people.

What appears next are frames with pictures of a school, an electricity bill and a glass of water — symbols of the AAP’s pet plank of education and its promise of free power and water supply.

The Reels post ends with a clip from a public address by Mr Kejriwal in which he says that a common man like him has been entrusted with the Chief Minister’s chair and that people consider him their brother and their son.

AAP’s earlier attempts to go national have met with little success, except in Punjab where they emerged as the main opposition party.

However, after its victory in the Delhi Assembly elections last year, the party has renewed its efforts.

Besides efforts to consolidate its position in Punjab, where the ruling Congress is struggling to quell infighting, AAP is pushing hard in Uttar Pradesh, Uttarakhand, Goa, Himachal Pradesh and Gujarat, all of which go to polls next year.