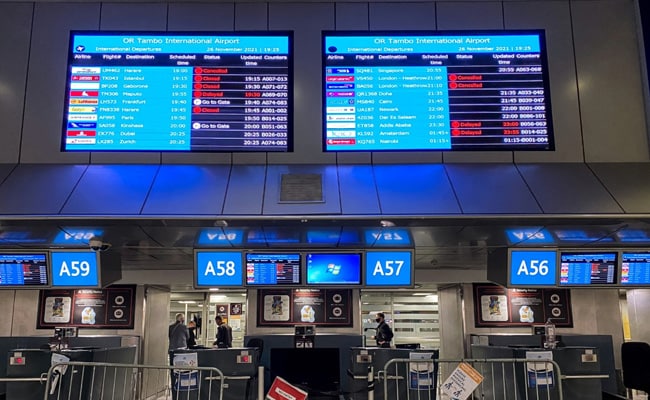 Hundreds of foreigners on family or business trips in South Africa desperately tried to get back home on the last available flights as several nations imposed restrictions on travellers due to the discovery of the new Omicron variant of COVID-19 in the country.

The UK announced on Thursday that all flights to and from South Africa and five neighbouring countries would be banned from Friday noon following an announcement that the new Omicron variant of COVID-19 had been detected in South Africa.

Many other countries followed suit, most of them indicating that only their own citizens would be allowed back, subject to a quarantine period.

In New Delhi, the central government asked all states and union territories to conduct rigorous screening and testing of all international travellers coming from or transiting through South Africa, Hong Kong and Botswana, where a new variant has been detected.

According to the government’s decision on Friday, airlines will be allowed to operate 50 per cent of their pre-COVID scheduled passenger flights between India and South Africa, Hong Kong and Botswana from December 15.

India does not have an air bubble arrangement — which allows special passenger flights between two countries amid COVID-related restrictions — with South Africa, Hong Kong and Botswana. Also, these three countries are classified under the “at-risk” category by India’s ministry of health.

Tourists from Britain, one of the largest in South Africa’s tourism and family visit sectors, were particularly hard hit.

“I need to get home to be with my family for Christmas, and now it looks like I might be stuck here with my friends,” said a tearful Joanne Johnson as airline employees explained the cancellation of flights, adding that arrangements were being made to repatriate British nationals only.

South African pensioners Johan Vermeulen and his wife Annemarie had been looking forward all year to join their son Andre, who had settled in the UK in 1999, and his family.

“We haven’t seen our grandchildren for more than two years now and thought that the pandemic was now easing enough to go there,” Annemarie said.

Jarred Sampson said even if he did manage to get onto a flight, he would be faced with the unbudgeted expense of going into quarantine for 10 days on arrival in the UK.

“I enquired and even though I have a vaccination passport, I would still be obliged to go into quarantine. This is going to set me back almost two thousand pounds and keep me back from my family in Bristol for a longer period,” Sampson said.

An Indian-origin person at the airport, Abdul Patel, said he had a ticket to return to Mumbai via Dubai on Monday, but was trying to get it changed to an earlier flight.

“I don’t know if India will also be affected, but my family from Surat will be meeting me in Mumbai,” Patel said.

An airline employee, speaking on condition of anonymity, said they expected a lot more pressure over the weekend as even more countries cancelled flights.

The Kathy Ireland weighted blanket is now an extra 20% off