Home News “How Not To Spend Your Money” 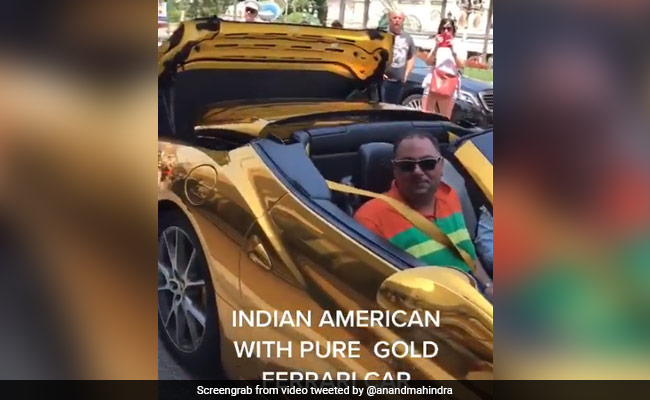 The video in question features a “gold car”.

Industrialist Anand Mahindra is known for his take on trending subjects, which he often shares on his social media accounts. And now, the Chairman of Mahindra Group has shared his opinion on an Indian-American man’s car. But what is so special about this car? Well, the vehicle in question is a “pure gold Ferrari”, according to a video that has been doing the rounds on social media. The video, which went viral on Twitter, features two men in the car, getting ready to drive away with people on the road watching them. A woman can also be heard laughing in awe as the man driving the car operates the detachable roof.

Seemingly unimpressed with the video and the car, Mr Mahindra shared the clip with a note. In it, he said, “I don’t know why this is going around on social media unless it is a lesson on how NOT to spend your money when you are wealthy…”

I don’t know why this is going around on social media unless it is a lesson on how NOT to spend your money when you are wealthy… pic.twitter.com/0cpDRSZpnI

Social media users seemed to agree with the industrialist’s view on the matter. Many also put forth their two cents about the video.

One user said, “This might also be a lesson on “how to get mugged in your very first drive,” suggesting that the blatant display of wealth could attract trouble as well.

“I don’t understand what is achieved by doing this?” another user wondered.

Hahaha! That’s right. I don’t understand what is achieved by doing this?

One viewer noted that this was yet another example of the love that Indians have for the yellow metal.

Well Indian love gold and will wear it to show off however it takes! And this is no showoff. Many Indian rich have multiple assets and they use it/show off in India too. Because of the fear of getting a gold plated car scratched, they still keep it in their garages 🙂

In addition to the amount of money spent, many were not impressed with what the owner had done to the car’s classic look.

“I pity the car. Covering up the wonderful Ferrari red or yellow that’s underneath that wrap. Somethings like this just make my mind go ‘Why?’” one tweet read.

Well rather than questioning his financial choice of this supercar, I am curious about his decision to wrap it in the hideous colour. I pity the car. Covering up the wonderful Ferrari red or yellow that’s underneath that wrap. Somethings like this just make my mind go ‘Why?’

Take a look at some of the other reactions:

Second this thought. Is this really what we want to be known for wealthy? https://t.co/Ao4CUcZLGM

Can’t imagine how much would a dent cost on this https://t.co/aHrYZOmhd7

Tell us what you think of the “gold car” and Mr Mahindra’s reaction.

Census 2021 Won’t Include Caste Data Except For Dalits, Scheduled Tribes

Shailene Woodley, Aaron Rodgers in ‘no rush’ to plan wedding