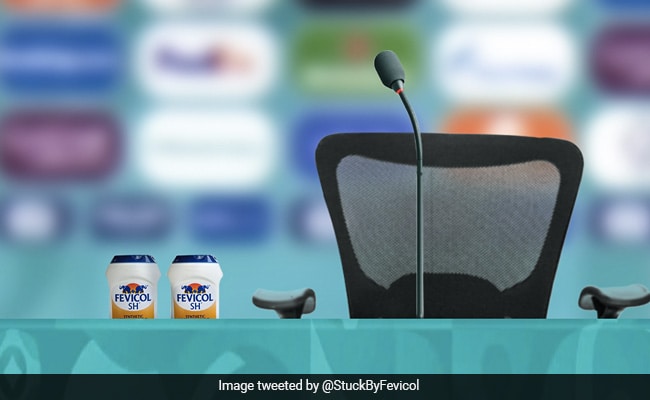 An image shared by adhesive brand Fevicol on Twitter.

At a recent press conference, star footballer Cristiano Ronaldo picked up two bottles of Coca-Cola and, with the slightest hint of derision, set them aside before holding up a bottle of water. The simple action sent Coca-Cola’s shares tumbling from $56.10 to $55.22 by the end of the press conference and started a veritable social media storm. Since then, people have created memes on Ronaldo’s Coca-Cola snub, dug up old videos that show him endorsing the aerated beverage and offered varied takes on the issue – but the funniest reaction, perhaps, came from unexpected quarters. Adhesive brand Fevicol used the controversy as an opportunity to create a hilarious ad that is being applauded on social media.

Fevicol’s ad features two bottles of its popular adhesive Photoshopped onto the press conference table. “Na bottle hategi, na valuation ghategi (neither will the bottle move, nor will the valuation drop),” read the caption, reiterating the brand’s promise of facilitating an unbreakable bond.

The tweet has racked up over 21,000 ‘likes’ on the microblogging platform, where thousands of people praised the brand’s creativity.

Time is an illusion, timing is an art – brilliant marketing by Fevicol! pic.twitter.com/aLzwAjaLWp

“Kudos to the advertising team,” wrote one person in the comments section.

Kudos to advertising team 💪 You guys are best in business. if #Ronaldo sits on that chair he may never ever get up from it 🥸🤣 he still score though ⚽️🥅

The message is clear “Na Valuation Ghategi” that’s what I love. 💕💏#Euro2020#Ronaldo#MazbootJod#FevicolKaJod

“Fevicol, hats off to your brilliant creativity,” said another.

Fevicol, hats off to your brilliant creativity. And @Ogilvy_India never fails to delight us. It seems you both are inseparable due to the Fevicol effect. Keep entertaining us like always. 😊🙏

“Fevicol ads have been consistently brilliant from more than 2 decades,” a Twitter user noted.

Kudos to the ad agency! Fevicol ads have been consistently brilliant from more than 2 decades ❤️

Indeed, Fevicol has entertained generations of Indians with its creative ad campaigns. Last year, their satirical dig at the dramatic exit of Duke and Duchess of Sussex — Prince Harry and Meghan — from the British Royal Family amused thousands.

At Least 5 Killed, 39 Injured In Gang Brawl In Honduras Prison