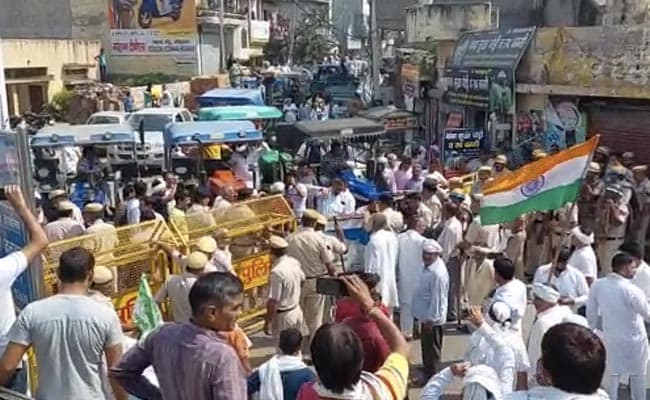 A huge number of farmers gathered despite police barricades.

The Chief Minister is scheduled to attend an event in Gohana in the afternoon.

Police barricades and check-posts were set up across the city as farmers announced they will demonstrate against the visit. The protesters, however, gathered around the stadium where there is a makeshift helipad and Chief Minister is scheduled to land.

As the agitation began, police officials tried to negotiate with the farmers.

The state has been witnessing demonstrations since last year when the centre cleared three controversial farm laws.

Tensions escalated in August when a top official in Karnal – Sub-Divisional Magistrate Ayush Sinha – was caught on camera giving controversial instructions against demonstrators: “Just pick up your lathi and hit them hard… It’s very clear, there is no need for any instruction, just thrash them hard. If I see a single protester here, I want to see his head smashed, crack their heads.”

He was removed from the post and sent on a month-long leave after a probe was launched amid anger over his remark.

Farmers have been protesting the BJP in Uttar Pradesh too where eight people, including four farmers, were run over by a speeding SUV earlier this month when they held a black-flag march against Union Minister Ajay Mishra and Deputy Chief Minister Keshav Prasad Maurya’s visit.

The Lakhimpur killings case has turned into a national issue ahead of the UP elections with the opposition demanding Ajay Mishra’s resignation.