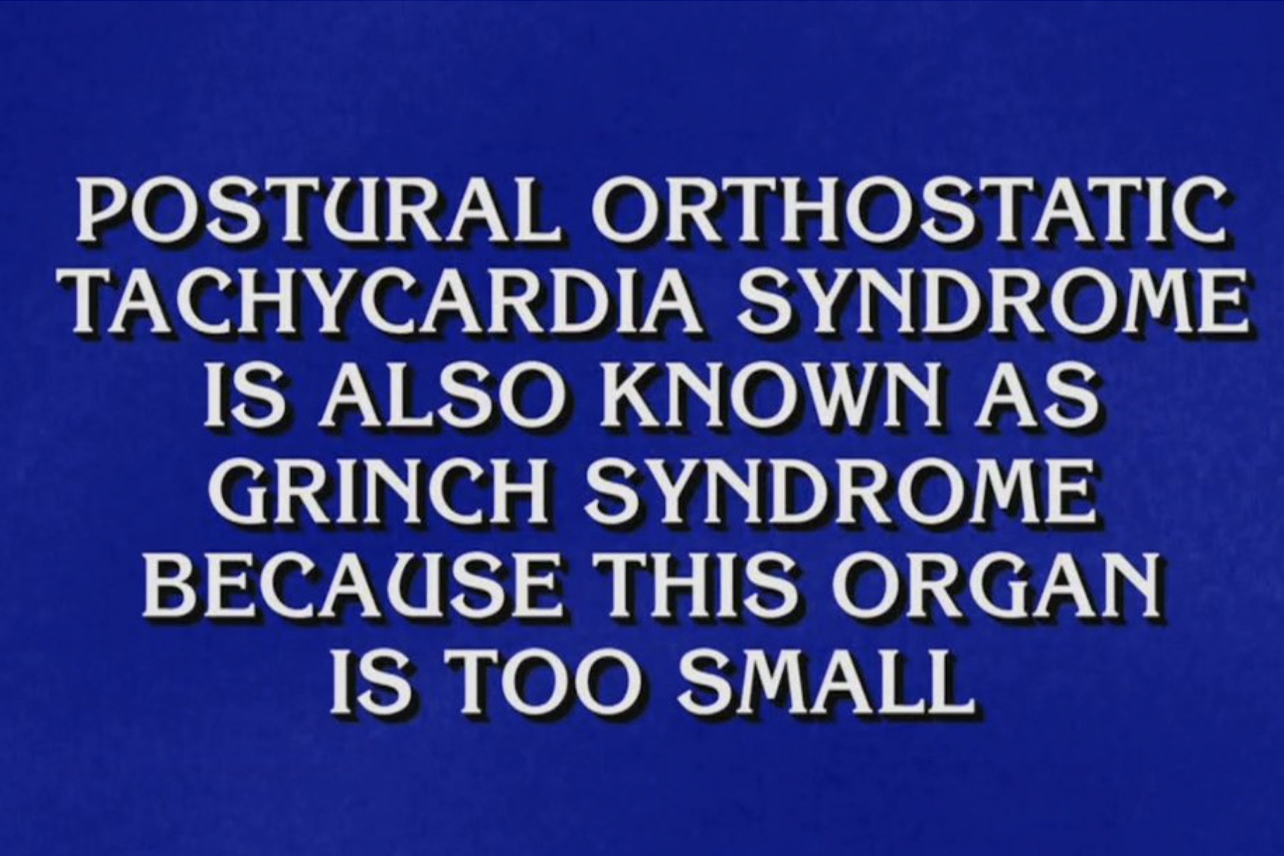 Jeopardy caused an uproar amongst some fans watching last night’s episode, with the game show being accused of using “shameful” language in a clue from the “Plain-Named Maladies” category. On yesterday’s show, interim host Savannah Guthrie quizzed contestants with the clue, “Postural Orthostatic Tachycardia Syndrome is also known as Grinch Syndrome because this organ is too small,” per Yahoo Entertainment.

The answer, “What is the heart?”, isn’t what stirred up anger on social media, but rather the use of the term “Grinch Syndrome,” which Jeopardy fans rejected as “outdated” and “inaccurate.” According to the Cleveland Clinic, Postural Orthostatic Tachycardia Syndrome (POTS) “is a condition that affects blood flow” and includes symptoms like “lightheadedness, fainting and an uncomfortable, rapid increase in heartbeat” when standing up from a reclining position. As Yahoo points out, some Covid-19 patients have also suffered from POTS.

“Not cool, @Jeopardy,” one Jeopardy viewer wrote on Twitter. “Not once have I referred to this syndrome as the Grinch Syndrome. Thanks for bringing inaccurate awareness to something I struggle with. Please never call this the Grinch Syndrome ever again,” while another tweeted, “The extent of my disappointment in one of my favorite shows is indescribable. This is not true on top of just being cruel. My offspring doesn’t have a ‘Grinch’ heart. Do better @Jeopardy.”

One viewer added, “@Jeopardy not everyone with postural or this tactic tachycardia syndrome has small hearts. The condition isn’t caused by having a small heart! Get your facts right. Calling it grinch syndrome is old and outdated. This condition sucks and is awful to live with!”

Oh @Jeopardy this is shameful. I have POTs and am sad you would resort to this. How low. And I might add, incredibly incorrect. Would you seriously tell a kid he has a condition that makes him Grinch?! I just…can’t believe this. #jeopardy https://t.co/9u5GIgdqE2

From what I know from my research, POTS is caused by issues in the way the nervous system works, not any physical issues with the heart being too small. The only place I’ve seen it referred to as “grinch syndrome” was one study that was poorly executed.

Hey @Jeopardy – misinformed answer about Postural Orthostatic Tachycardia Syndrome. Way to be hurtful to a lot of people. I have never heard POTS referred to as the “Grinch syndrome” and a small heart is not commonly associated with the disorder. Disappointed with the show.

While the clue caused plenty of disappointment with fans after last night’s show aired, it also caught the attention of Dysautonomia International, a non-profit organization for autonomic nervous system disorders. The organization’s official Twitter account sent out a series of tweets last night decrying the use of the term “Grinch Syndrome.”

Addressing the game show specifically, they wrote, “Hey @Jeopardy, no one with any credibility calls POTS “Grinch Syndrome.” Promoting outdated misogynistic terms to describe a debilitating autonomic nervous system disorder that impacts millions of Americans is not cool. We request an apology on behalf of our community. Do better.”

Decider has reached out to Jeopardy for comment, but did not hear back by time of publication.