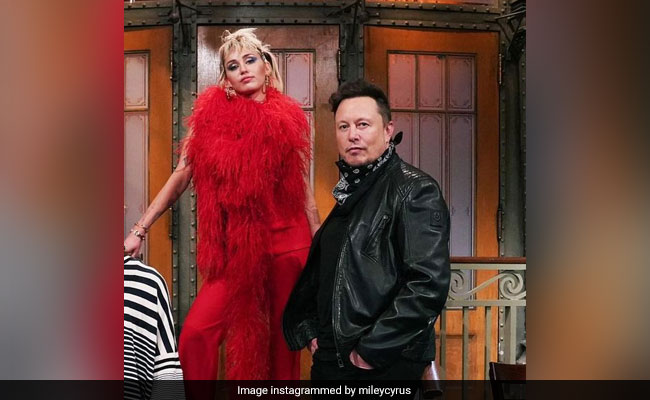 Tesla CEO Elon Musk, known for his love for memes, has a hilarious one as a response to a video targeting him by hacker group ‘Anonymous’. This time, his chosen weapon is fictional pop singer Hannah Montana.

Sharing a screenshot of the hacker group’s video, whose subtitle was altered to say, “Hannah Montana is actually Miley Cyrus”, the billionaire’s tweet just read “!!”.

The meme mocks Anonymous’ video about Mr Musk’s ability to move cryptocurrency markets — as it is public knowledge — just like everyone knows Hannah Montana, a teen singer in a hugely popular sitcom of the same name, was played by musician-actor Miley Cyrus.

Ms Cyrus was quick to reply to the billionaire.

“I told you that in confidence! You can build a rocket but can’t keep a damn secret?!?!,” she tweeted.

Mr Musk, 49, had earlier mocked the video threat as well – again with a meme.

Last week, the international hacking collective ‘Anonymous’ saying they are planning to target the SpaceX CEO for influencing the cryptocurrency market far too often through just his tweets.

Two ‘Anonymous’ Twitter handles were prompt to distance themselves from the video that raked up millions of views in days. However, a third handle with 5.9 million followers, then shared the video.

“It appears that your quest to save the world is more rooted in a superiority & savior complex than it is in actual concern for humanity,” the group captioned the video and added “cc: Elon Musk”.

In the video message, ‘Anonymous’ appeared extremely miffed with Mr Musk due to the power he wields over the cryptocurrency market.

“It appears that your quest to save the world is more rooted in a superiority & savior complex than it is in actual concern for humanity.” cc: @elonmusk

“You may think you are the smartest person in the world, but now you have met your match. We are anonymous, we are legion,” the narrator wearing a Guy Fawkes mask in the video concludes.

The video further slammed the business tycoon saying he suffers from a “superiority complex” and that he is hurting working-class people and their prospects by his constant crypto trolling.

“Elon is not a friend to the common man,” the group says in the video.

Mr Musk has recently announced that Tesla has stopped accepting Bitcoin as payment for its cars out of concern – that it will contribute to greater consumption of fossil fuels.

On Monday, Elon Musk backtracked and said that Tesla could use Bitcoin again making the crypto price jump to a two-week peak.

Many crypto investors have not taken too nicely to this who have blamed Mr Musk for “manipulating markets”.

The engineer has also said that Dogecoin, a cryptocurrency he invented as a joke to essentially make fun of real cryptocurrencies, had the potential to be a real one. “That the currency that began as a joke, becomes the real currency,” he said.

“Don’t invest your life savings into cryptocurrency. That’s unwise,” he however added.