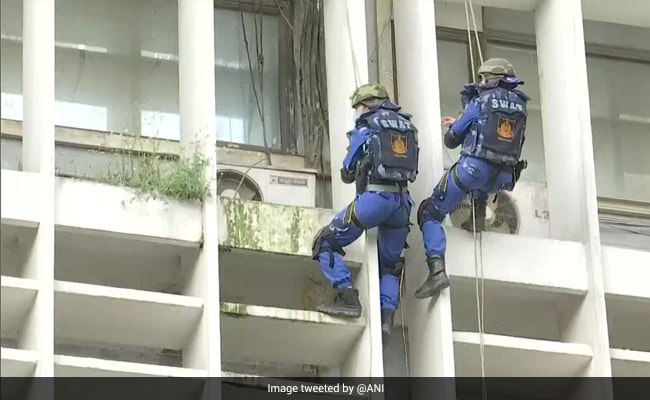 The mock drill was coordinated by the Special Cell, the nodal anti-terror agency of Delhi Police.

The Delhi Police on Saturday conducted mock anti-terror drills at three strategic locations in the city in coordination with other agencies, officials said.

A coordinated multi-location mock drill exercise was held at ITO, Vasant Kunj and Dwarka on Saturday at 4 pm by the Delhi Police in which specialised agencies like NSG took part, according to a statement.

Mock drills are the standard mechanism whereby the efficiency and efficacy of institutional arrangements and inter-agency coordination are put to the litmus test in various scenarios, it said.

The mock drill was coordinated by the Special Cell, the nodal anti-terror agency of Delhi Police.

At the old police headquarters building at ITO, the mock drill began with a decoy vehicle reaching the exit gate of old PHQ. After a brief skirmish with security, a group of decoy terrorists entered the building and held some persons hostage at gunpoint, while another group fled from the scene in a getaway car, the statement said.

Simultaneously, a second terror strike scenario was initiated at Ambience Mall, Nelson Mandela Road, Vasant Kunj, where an improvised explosive device (IED) was lobbed by decoy terrorists near its main entrance and thereafter, the decoy terrorists fled the scene while opening indiscriminate fire, it stated.

According to the statement, the third scenario was simulated at Dwarka Sector-21 metro station where an explosion was reported near the main gate and decoy terrorists were reported to have forcibly hijacked a metro train found stationary at the platform.

At all three locations, all stakeholders — local police, traffic police, PCR, SWAT and civic agencies like fire service and health department — were rushed by the Central Police Control Room. Incident Command Posts were established and defensive evacuation drill was executed, it said.

The special forces of SWAT, Special Cell and Metro Rail security provider CISF formed the inner cordon and anti-terror operations, as prescribed in the drills, were carried out. Hostage rescue, secondary device check, screening and securing of suspects, etc. complex operations were simulated with coordination and cooperation of all responding actors, it said.

As special observers, teams of NSG attended all the three scenarios and made critical evaluation of the efforts, response and proficiency of the responding agencies which is required for constant upgradation of professional skills of a premier police force, it said.

No untoward incident or avoidable panic was noticed till the conclusion of the mock drill. Response of officers and personnel of all districts, units and civic agencies were found appropriate, the statement said.