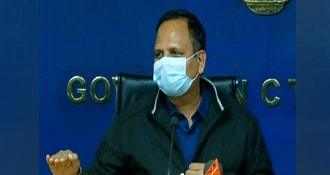 All deaths that occur in Delhi are entered in the “death register”, said Satyendar Jain. (FILE)

Delhi Health Minister Satyendar Jain on Sunday said no one can tinker with the number of deaths in Delhi, including those occurring due to coronavirus.

His comments came in the backdrop of some states, such as Bihar, Punjab, Uttarakhand and Maharashtra, reporting “backlog deaths” — fatalities from earlier months added to the death count in June.

All deaths that occur in Delhi are entered in the “death register”. Fatalities due to COVID-19 figure in the health bulletin issued daily by the government, he said.

“No one can increase or decrease the number of deaths in Delhi. So far, around 24,900 people have died due to coronavirus in the city,” he told reporters in response to a question.

The Minister also said the government has issued directions to district magistrates and the Delhi Police to take strict action against people violating Covid protocols at public places.

The number of COVID-19 cases in the national capital has dropped to 135, but it doesn’t mean that the pandemic has ended. The very is very much there, he added.

On Saturday, Delhi recorded seven deaths due to the viral infection, the lowest since April 1, and 135 fresh cases with a positivity rate of 0.18 per cent.

It reported 124 fresh COVID-19 cases, the lowest since February 16, and seven deaths in a day as the positivity rate dipped to 0.17 per cent, according to data shared by the health department here on Sunday.

To a question on water shortage, he said Delhi faces some supply issues in the summers. Sometimes, the increase in ammonia content and algae in the Yamuna river affects water production, Jain said.

“There were some issues with water supply in some areas 10-15 days ago. The situation is normal now,” he said.

The Delhi Jal Board supplies more than 930 million gallons of water to households in Delhi every day. Tankers are deployed in areas lacking piped water supply, the Minister said.