Home News Covaxin Trials Among Children A Big Hit At AIIMS Patna. Because… 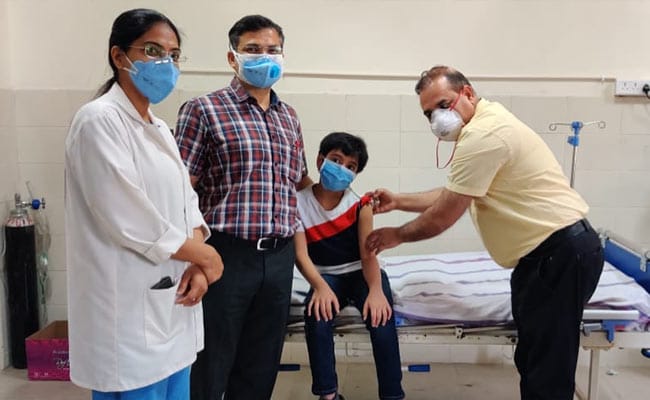 In the trial for 6-12 age group, seven children were given first dose

Doctors at the All India Institute of Medical Sciences (AIIMS) Patna are coming forward with their children to take part in the ongoing clinical trial of Bharat Biotech’s Covaxin on minors at the premier institute, blunting doubts on vaccine hesitancy.

The trials have been flagged off in anticipation of a mutated variant of Covid, that could leave children vulnerable.

In the trial for 6-12 age group, which began on Monday, seven children were given first dose, said AIIMS Patna Superintendent Dr CM Singh.

Doctor couple Veena Singh and Santosh’s elder son Satyam, 13, who was given the first dose was joined by his younger brother Samyak, 7.

“It was with the consent of the children so that all the misconception about the vaccine comes to an end,” Dr Veena Singh told NDTV.

Twenty children of 12-18 years have been vaccinated till now as part of the first round of clinical trial of Covaxin, said officials associated with the Covid project at AIIMS Patna.

Covaxin is a vaccine indigenously developed by the Hyderabad-based company, in association with the Indian Council of Medical Research. It was one of the first two deployed by the centre in its nationwide Covid inoculation drive.

India began the clinical trial of Covaxin on children on June 2.

Most nations are yet to approve any vaccine for the use of children. Last month, the US and Canada authorised Pfizer-BioNTech’s vaccine for use in some age groups of children.

Amid reports of vaccine hesitancy, the centre last week issued a clairification titled “Busting Myths of Immunization”, saying such hesitancy is a globally accepted phenomenon.

India was caught in a devastating Covid sweep over the past few months, with infections appearing to be ebbing only in the past few days.