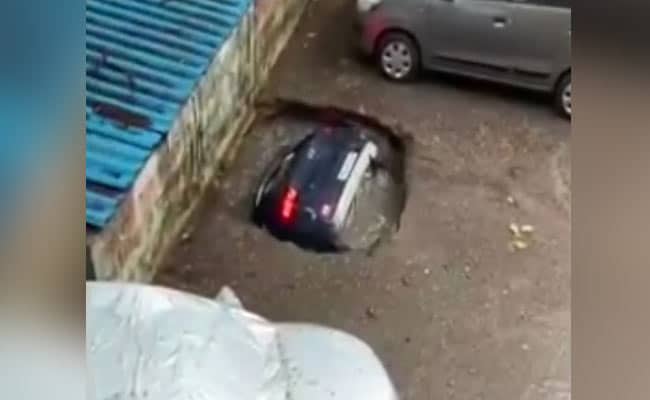 The other vehicles parked near the car, including one right next to it, were not affected.

A parked car disappeared within seconds into a sinkhole at a residential complex in Mumbai, which has been receiving heavy monsoon rainfall over the past few days.

A video of the bizarre incident in Ghatkopar, which is doing the rounds on social media, shows the car’s bonnet and front wheels enter the sinkhole first. The rear part of the car follows and soon the vehicle disappears whole under the water.

The other vehicles parked near the car, including one right next to it, were not affected.

#MumbaiRains
Car swallowed completely by a sinkhole in residential complex in Mumbai.. Later discovered that it was a covered well under a parking lot! pic.twitter.com/nvLct0QqfU

The video has emerged at a time when Mumbai, along with other areas in coastal Maharashtra, is getting heavy monsoon rainfall.

In view of the weather department’s rain forecast for the weekend, the Brihanmumbai Municipal Corporation has issued a “high alert” for all agencies, including power utility firms. The Coast Guard, Navy and NDRF have been asked to remain on standby.