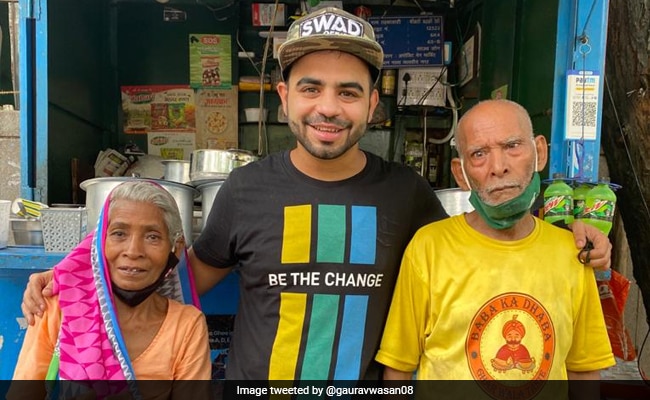 The “Baba ka Dhaba” story which witnessed multiple plot twists and captured the attention of people since it surfaced last year has finally got a happy ending. The food blogger responsible for making “Baba Ka Dhaba” an overnight hit has shared a happy picture with the elderly couple who run the food kiosk and who had in past accused him of swindling money meant for them.

“All is well that ends well,” tweeted Gaurav Wasan – whose video spotlighting the struggle of the elderly couple had led to donations and massive footfall at the humble eatery – alongside the photo.

This comes after an apology by Kanta Prasad – the owner of the dhaba. In a video shared by another food blogger, Mr Prasad, with folded hands, can be heard saying, “Gaurav Wasan was not a thief. We never called him a thief”.

Hundreds of people queued up outside the eatery in south Delhi after the video, in which ”Baba Ka Dhaba” owner tearfully talked about the loss of business due to the pandemic, went viral. The owner also received generous donations from across the country.

The humanitarian gesture by the blogger, however, turned into a massive controversy after Mr Prasad accused him of financial misappropriation. The social media influencer denied the charges and defended himself with his bank statements.

“The person who forgives is a bigger person than who makes a mistake – That’s what my parents have taught me,” said Mr Wasan in his latest tweet in Hindi.

The 80-year-old had started his own restaurant in the same locality of Malviya Nagar where he ran his shop for 30 years after his rise from rags to riches. He, however, is back at his food stall now after his new venture did not take off.

“On an investment of Rs 1 lakh, we only earned Rs 35,000, that is why we shut it. I am happy running my old eatery as the customer footfall is good here,” he was quoted as saying by news agency ANI.

He also said that he will now run his dhaba till the day he dies.