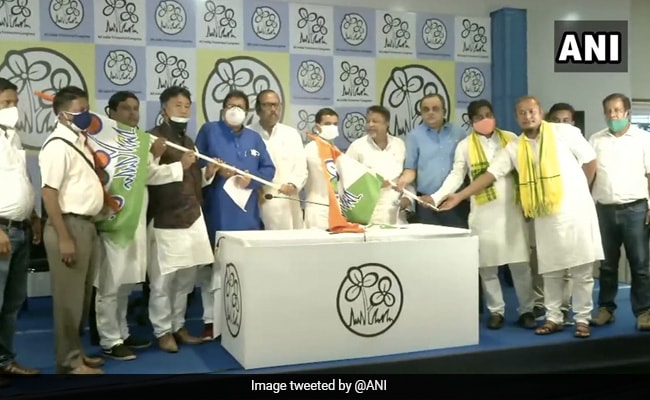 In yet another jolt to the BJP, the party’s Alipurduar district president, Ganga Prasad Sharma, joined the TMC on Monday, as senior leader of the state’s ruling party Mukul Roy, who also switched sides two weeks ago, claimed that this was the “beginning of the BJP’s end” in the state.

Seven other BJP leaders from the region, too, followed in Mr Sharma’s footsteps and joined the Mamata Banerjee camp.

Mr Roy, addressing a press meet, said the BJP’s rise in the state began with the 2019 Lok Sabha polls, when it managed to bag several seats in north Bengal, and its downfall, too, will start from the region.

“This is just a glimpse of what lies ahead… The BJP’s fall in the state is imminent,” Mr Roy, who was the BJP’s national vice president until recently, underlined.

Asked what he might have to say about BJP MLA Suvendu Adhikari’s insistence that he quit as an MLA, having won the Krishnanagar Uttar assembly seat on a BJP camp ticket, Mr Roy said, “He should first find out what his father (Sisir Adhikari) was up to.”

Mr Roy was referring to the TMC’s demand for disqualification of Kanthi MP Sisir Adhikari, who crossed over to the BJP, much like his son, ahead of the polls.

Mr Sharma, on his part, alleged that the BJP has ignored the sentiments of grassroots workers while choosing candidates for the assembly polls, “inducting people at its own will and flying them to Delhi”.

“We felt neglected but still gave our best to the organisation and ensured that five saffron camp candidates from Alipurduar district get to win the assembly elections. Now, however, I intend to work for people under the leadership of Mamata Banerjee,” he stated.

Rejecting Suvendu Adhikari’s assertion that Mr Sharma changed sides as he was denied a saffron party ticket in the assembly polls, Mr Sharma said, “Let me ask him why he chose to join the BJP ahead of the polls? Also, I wish to know why he was made the leader of opposition in the Assembly and not Manoj Tigga, who is a senior and loyal member of the camp.”

Coming down heavily on local MP John Barla, who has recently sought a separate union territory comprising north Bengal districts, the BJP turncoat pointed out that the parliamentarian, instead of doing something constructive for the region, is “fanning the flames of division”.

TMC deputy leader in the Upper House, Sukhendu Sekhar Roy, who was also present at the press conference, said the people of the state will distance themselves from the BJP even further due its demands of “separatism”.

Echoing him, education minister and senior TMC leader Bratya Basu noted that the BJP, on one hand, is observing “Poschimbongo divas” (West Bengal Day), and on the other, its MP is seeking a bifurcation of the state, with no regard for its integrity.

Talking about Governor Jagdeep Dhankhar’s visit to north Bengal, the TMC’s Rajya Sabha MP said, “He is free to go anywhere he wishes to… but he should have taken the state government in confidence.”

Mr Dhankhar has embarked on a week-long visit to north Bengal earlier in the day amid the controversy that has erupted in the region in the wake of Mr Barla’s demand.

Slamming state BJP president Dilip Ghosh over his claim that Bengal is becoming a “safe haven of terrorist outfits due to inaction of the state government”, the TMC MP said, “There are central agencies to keep a check on terrorist activities. If we were to believe him, the obvious question would be what are these agencies doing.”

“Are the agencies only there to harass and arrest student activists and the ones who raise their voice against the policies of the BJP government?” the MP added.

What Are Your Food Cravings Telling About Your Health? Nutritionist Decodes