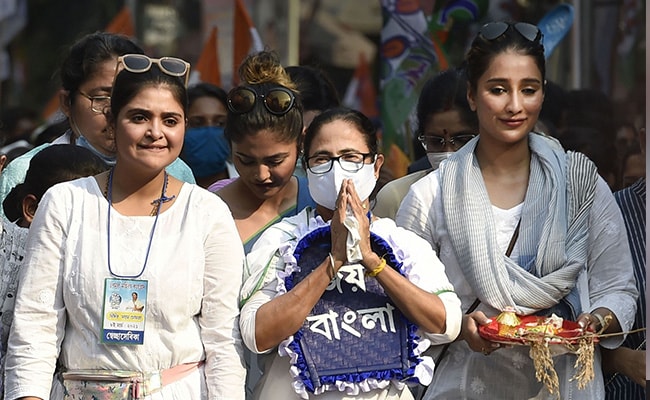 Mamata Banerjee on Tuesday said that her Gotra or sub-caste was Shandilya.

West Bengal Chief Minister Mamata Banerjee’s “gotra” or sub-caste fanned a dust-up between the Trinamool Congress and the BJP for the second day on Wednesday as Union Minister Giriraj Singh’s comment linking her to Rohingya Muslims amped up the shrillness of an exceptionally polarised election.

Playing one final card on Tuesday just before the curtains came down on campaigning for the second phase of the Bengal election that will include her prospective seat of Nandigram, Ms Banerjee told voters she belonged to the ‘Shandilya gotra‘ – one of the eight highest Brahmin ‘gotras‘.

At a rally in the constituency that which will see a high-stakes prestige battle between Ms Banerjee and her aide-turned-rival Suvendu Adhikari – the Chief Minister led off by reminiscing about visits to temples, where priests asked her for her ‘gotra‘ or lineage.

“During my second campaign, I visited a temple where the priest enquired about my ‘gotra‘. I told him ‘Maa Maati Manush‘ (the slogan that powered her to victory in 2011),” Ms Banerjee said, before adding, “Actually I am ‘Shandilya’.”

Senior BJP leader and Union Minister Giriraj Singh, infamous for incendiary and communal speeches, retorted that the Chief Minister was announcing her gotra in desperation.

“I never need to say it is my gotra, I write it. But she says it out of fear of losing the election. Mamata Banerjee, please tell me whether Rohingya and infiltrators are also of the Shandilya gotra? Her defeat is certain,” said Mr Singh.

That comment was picked up by Trinamool Congress MP Mahua Moitra on Wednesday, who appeared to accuse the BJP leader of being from the “Chotiwala Rakshasa Clan (Ponytailed Demonic clan)”. Mr Singh, who uses the prefix “Shandilya” for his Twitter name, has a ponytail.

Far better than being from the Chotiwala Rakshasa Clan!

Ms Moitra’s comment angered several BJP leaders including Mr Singh, who tweeted back in Hindi, “Shikha / Chutia (ponytail) has been an integral part of the Sanatan civilization and culture of India and it is not fair to abuse Sanatan for the sake of a vote. Keep washing the Rohingya’s feet… Soon Hindustan will ask for the answer.”

His party colleague from West Bengal and a frequent adversary of Ms Moitra on Twitter, Locket Chatterjee, also joined the discussion.

Proud of being a Rohingya and calling Hindus Rakshas is a new low even by TMC’s otherwise low standards! Shame on their appeasement politics… https://t.co/GdZagEoQFO

Union Minister Prakash Javadekar said that Ms Banerjee has realised that she has lost ground in West Bengal and is speaking about her ”gotra” in desperation, but this “drama” will not help her party win the assembly election.

“You are disclosing your gotra and are opposing ‘Jai Shri Ram’ and also disallowed Ma Durga’s immersion during Durga Puja. People understand everything as to who is genuine and who is not,” he told reporters.

Hosting a bitter face-off between Mamata Banerjee’s Trinamool and the BJP, West Bengal has seen an unprecedented degree of religious polarisation ahead of the eight-phase election that ends April 29. Votes will be counted on May 2.

Ms Banerjee had raised the subject earlier this month when she came to Nandigram to file her nomination, accusing her opponent Suvendu Adhikari of playing a “70:30 formula” – of drawing in 70 per cent Hindu votes and 30 per cent Muslim ones.

Since then, the rhetoric has plunged to new lows with this week Mr Adhikari calling his former party chief “Begum” and warning that Bengal will turn into “mini-Pakistan” if she returned to power for a third time.