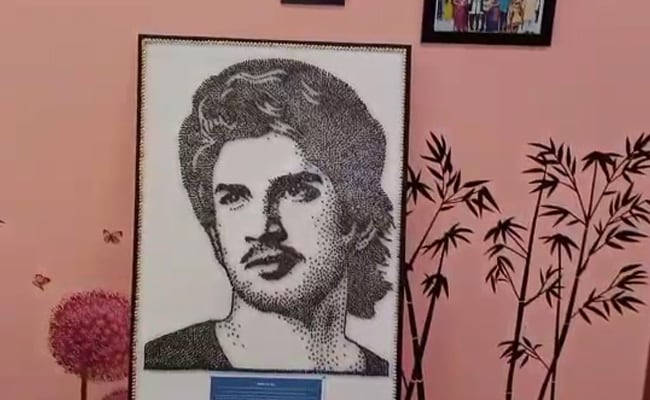 Saurav Mondal took 8 days to complete the portrait after working for 5 hours a day.

The artist, a Sushant Rajput fan, gave a tribute to the actor who was found dead at his Mumbai home last year.

Saurav Mondal took eight days to complete the portrait after working for five hours a day.

Mr Mondal had earlier set a record as an exceptional artist who made the portraits of two famous personalities of India – Dr Bhupen Hazarika and Netaji Subhash Chandra Bose – using his mouth. The feat was completed in just 7 minutes 55 seconds.

Sourav’s inclination towards art began from his childhood. He wanted to be an artist but he had to leave it midway after passing his higher secondary examinations.

His name was registered in the Indian Book of Records on December 24, 2020. He got a certificate and a medal for achieving the feat.

He was also honoured and invited by the World Records University, the United Kingdom to undergo a doctorate programme and write a thesis about his art form.

Sushant Singh Rajput’s death was followed by multiple investigations, which are still going on. He starred in many Bollywood movies, including “MS Dhoni: The Untold Story”, based on the life of the cricketer.

His last movie was “Dil Bechara”, which released last year in July after his death.