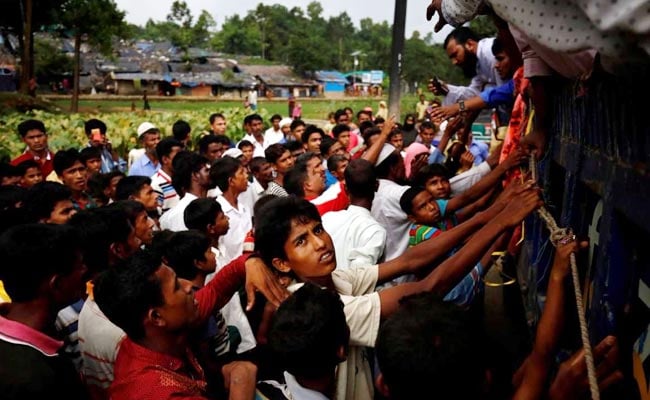 About 10,000 refugees have fled from Myanmar to India and Thailand as nationwide clashes in the country led to “acute” new displacements of hundreds of thousands of civilians, Special Envoy of the UN Secretary-General on Myanmar has said, warning that the regional threat of the crisis is real.

“In my daily contacts with stakeholders in Myanmar, I hear first-hand accounts about the dire situation. People suffer from deprivation, have no hope and live in fear,” Christine Schraner Burgener, Special Envoy of Secretary-General Antonio Guterres on Myanmar, told the UN General Assembly on Friday.

In the absence of international action, civilians are forming people’s defence forces, she said. They use self-made weapons and receive military training from ethnic armed organisations in their resistance grounded on democratic solidarity. Multiple regions of the country which have not seen armed clashes in decades become zones of significant unrest.

“Nationwide clashes, including in central Myanmar and regions bordering China, India and Thailand, have led to acute new displacements of around 175,000 civilians, and some 10,000 refugees have fled to India and Thailand. The regional threat of the crisis is real,” she said, adding that “we must continue to call for maximum restraint and condemn all forms of violence. The risk of a large-scale civil war is real.”

Mr Burgener emphasised that as the region faces a multi-dimensional crisis in the heart of Asia, “our timely support and action is paramount”.

She also stressed that the international community must not forget the Rohingya people as the situation of the Rohingya remains dire and the General Assembly must continue to be seized on the issue as an integral part of its engagement on Myanmar.

The UN General Assembly adopted the draft resolution ‘The situation in Myanmar” on Friday with 119 member states, including Myanmar, voting in favour.

Belarus was the sole country voting against the resolution, while 36 nations abstained. The nations which abstained from voting include Myanmar’s neighbours — India, Bangladesh, Bhutan, China, Lao, Nepal and Thailand. Russia also abstained.

India abstained on the General Assembly resolution, saying its views have not been reflected in the draft, which did not get support even from Myanmar’s neighboring countries and New Delhi does not believe the resolution, tabled hastily, is conducive to “aiding our joint efforts towards strengthening democratic process” in Myanmar.

In the Explanation of Vote in the General Assembly hall, India”s Permanent Representative to the UN Ambassador T S Tirumurti had said as Myanmar’s immediate neighbour and close friend of its people, India is cognisant of the “serious impact of political instability” and the potential of its spillover beyond Myanmar’s borders. India has been calling for greater engagement with the objective of peacefully resolving all issues.

“We already have such an ongoing initiative under the aegis of ASEAN. It is important that we extend support to the ASEAN efforts. During the discussions on this resolution, we had engaged in a spirit of finding a constructive and pragmatic way forward and had accordingly shared our suggestions to those who piloted this resolution,” Mr Tirumurti said.

“However, we find that our views have not been reflected in the draft being considered for adoption today. We would like to reiterate that a consultative and constructive approach involving the neighbouring countries and the region, remains important as the international community strives for the peaceful resolution of the issue,” he said.

Mr Tirumurti had emphasised that the fact that there is lack of support from all neighbouring countries as well as several countries in the region itself “should, hopefully, serve as an eye-opener to those who chose to pursue a hasty course of action”.

“We, therefore, do not believe that the tabling of this resolution for adoption at this juncture, is conducive to aiding our joint efforts towards strengthening democratic process in Myanmar. We are therefore constrained to abstain,” he said.

The resolution expressed “grave concern” at the February 1 coup and called upon Myanmar”s military junta to immediately and unconditionally release President Win Myint, State Counsellor Aung San Suu Kyi and other government officials, politicians and those arbitrarily detained or arrested.

It also called “upon all member states to prevent the flow of arms into Myanmar”.