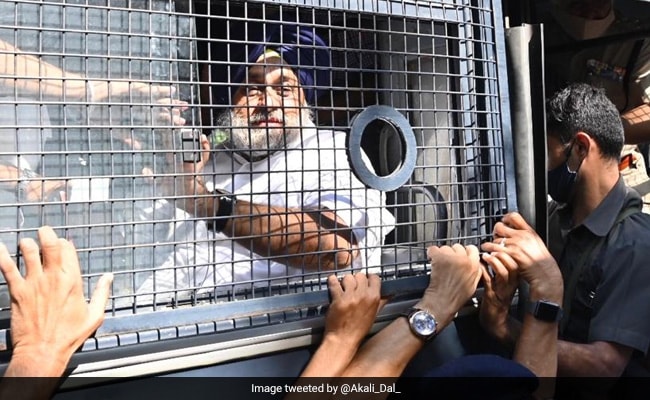 Sukhbir Badal along with other party leaders protested outside Raj Bhawan in Chandighar.

Some SAD leaders, including party chief Sukhbir Singh Badal, were briefly detained by the police on Thursday when they tried to march towards the governor’s residence to protest the Centre’s decision to extend the BSF’s jurisdiction in Punjab, among other states, according to officials.

The Shiromani Akali Dal (SAD) alleged that the police manhandled and hustled Mr Badal and some party supporters who were part of the protest held outside the Raj Bhawan.

Police said SAD leaders and supporters were briefly detained when they were marching towards the Governor’s House.

However, SAD said in a statement that Mr Badal courted arrest and was taken to the Sector 3 police station along with senior party leaders and workers in a bus.

The Union government has amended the BSF Act to authorise the force to undertake search, seizure and arrest within a 50-km stretch, instead of the existing 15 km, from the international borders in Punjab, West Bengal and Assam.

The Union home ministry issued a notification in this context on October 11, amending a July 2014 enabling provision for BSF personnel and officers while they operate in the border areas.

Mr Badal, who was accompanied by party leaders Bikram Singh Majithia and Daljit Singh Cheema, said that the Akalis wanted to meet Punjab Governor Banwarilal Purohit and apprise him that the Centre’s move to “attack the federal structure” is not good.

Addressing party leaders and workers at the protest site, Mr Badal claimed, “Through this order, Amritsar city, Tarn Taran, Ferozepur, Fazilka and virtually half of Punjab will come under their (BSF’s) domain. Law and order will eventually come under the Centre’s control.”

The Akali Dal has been fighting to ensure that the country’s federal structure remains intact and will continue to fight for it, he said.

Mr Channi had on Wednesday slammed the Centre’s “unilateral decision” to extend the BSF’s jurisdiction and called it a “direct attack on federalism”.

Mr Badal alleged, “First the Centre framed the farm laws, a subject which is states” domain, and now they want to take control of law and order too.”

Pargat Singh also slammed former chief minister Amarinder Singh, who voiced his support for the Centre’s move on Wednesday and said that it will “only make us stronger”.

Dubbing Amarinder Singh’s statement as unfortunate, Pargat Singh said, “He acts like he is with the BJP.”

With this order, Pargat Singh claimed, half of Punjab will come under the BSF’s control.

The Centre wants to “later show Punjab as a disturbed state and push for the imposition of Governor’s rule”, he alleged.

Mr Singla said that the BJP-led central government is trying to “infiltrate rights of states, but it will not be allowed to break the federal structure”.

“We have seen earlier how the Centre has tried to weaken the rights and powers of states,” he said.

“We are proud of our security forces which are meant to secure our borders and protect India from foreign aggressors. Using them to cover up the failures & to clean up the mess created by leaders & govts is very alarming,” he said in a tweet.

We are proud of our security forces which are meant to secure our borders and protect India from foreign aggressors.Using them to to cover up the failures & to clean up the mess created by leaders & govts is very alarming. It not only denigrates our brave forces but also 1/2

“It not only denigrates our brave forces but also adversely affects their morale discipline & preparedness. It”s this use of our forces as political tool which should be avoided. No one knows it better than @ capt_amarinder Singh ji,” he said.