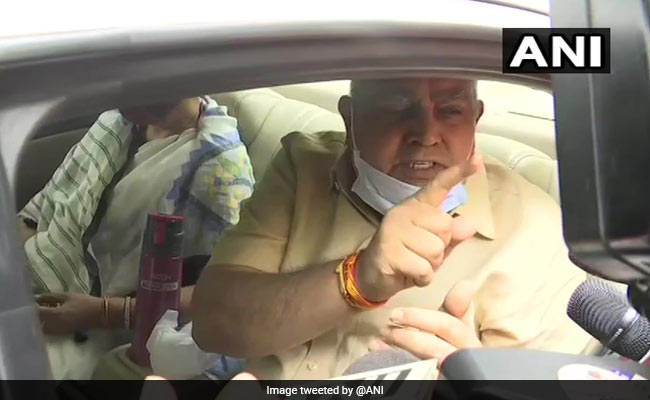 Jagdeep Dhankar had sent a report on the violence to the Centre soon after the Bengal polls.

With Bengal Governor Jagdeep Dhankhar, who has been in Delhi since Tuesday, met Union Home Minister Amit Shah for the second time in 48 hours. In Thursday’s meet, he is believed to have briefed the minister about the the law and order situation in the state, where several incidents of violence were reported after the assembly election.

“This is an occasion for us to believe in democracy, constitution, rule of law. I appeal to the bureaucracy and the police to confine to their code of conduct and regulations. Such kind of post-poll violence is worst seen since Independence,” Mr Dhankar told reporters today after his meeting with Mr Shah.

His meeting with Mr Shah comes amid the Governor’s feud with Chief Minister Mamata Banerjee over a range of issues. Over the past few weeks, Mr Dhankhar has raised concerns on the alleged incidents of political violence in West Bengal.

Mr Dhankar had sent a report on the violence to the Centre soon after the Bengal polls. Before his Delhi visit, he had slammed Ms Banerjee over her handling of the violence.

Ms Banerjee’s government said the post-poll violence was “somewhat unabated” when the Election Commission was in charge of law and order. The cabinet restored order once the path ceremony was over, it said.

The Calcutta High Court Friday directed Chairperson of the National Human Rights Commission (NHRC) to form a committee for examining all cases of alleged human rights violations in the post-poll violence in Bengal. A five-judge bench of the high court heard a bunch of petitions alleging post-poll violence in the state.

(With inputs from ANI)