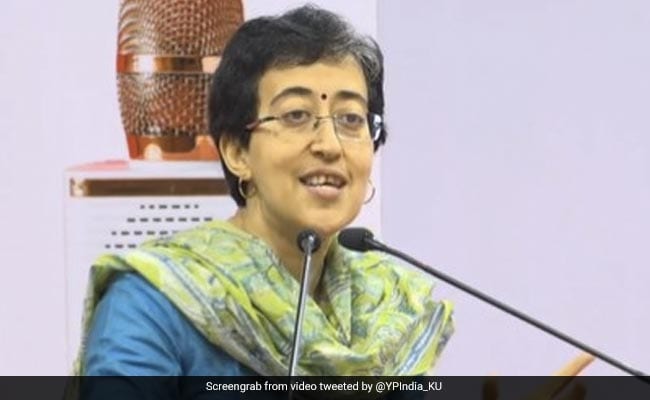 Atishi said without an implementation plan, the NEP document is akin to a “wish list”

Aam Aadmi Party (AAP) leader Atishi on Sunday raised question marks over the quality of education in government-run schools as well as implementation of the National Education Policy (NEP) during an event, while BJP leaders from Gujarat, who also took part in the function, accused the Arvind Kejriwal-led government of spending crores on advertisements.

Atishi said the NEP document is akin to a “wish list” and holds no value in the absence of an implementation plan, while BJP leader Sunil Deodhar alleged that the AAP government in Delhi spends “Rs 600 crore of taxpayers’ money” on advertisements every year.

Gujarat Education Minister Jitu Vaghani claimed that due to the improved quality of education and infrastructure, nearly four lakh students of private schools have taken admission in government-run schools.

These leaders were invited to share their views on the subject of NEP at the ‘Youth Parliament of India-2021’ event held at Karnavati University, a private university located at Uvarsad village in Gandhinagar district.

“When I was reading the new education policy, I felt that though we are good at formulating policies, the bigger question is whether we are able to implement it. This new policy is more like a wish list, just like we wish that India wins the cricket world cup or we people like me wish to remain fit,” Atishi said.

There is no meaning of wishing such things if we do not have a plan or a system of implementation, the AAP MLA from Delhi added.

“I was appointed as an educational advisor when AAP’s government was formed for the first time seven years back. When I visited a government school, a stinking smell from the toilet welcomed me, That was more or less the situation of government schools across the country,” she said in her address to nearly 1,000 students.

She claimed it was Arvind Kejriwal-led AAP government in Delhi that showed the “strong will” to change the scenario and allotted 25 per cent of the total budget to the education sector.

Atishi left immediately after her address and was not there when Vaghani’s turn came.

In his apparent response to the AAP legislator, Vaghani said the state-run schools in Gujarat are also offering quality education and infrastructure, which is why nearly four lakh students had quit private schools and have taken admission in government-run schools in recent years.

The minister even asked college students present in the hall to visit any government-run school in their area to verify his claims.

“Gujarat nearly has 33,000 primary schools run by the government. This is not a state having a size of a city. We have recently launched a Command and Control Centre to supervise the government schools. Officials from other states visit Gujarat to learn about it and implement it in their states,” Mr Vaghani said in his speech.

On the occasion, Mr Vaghani announced that all the recommendations of the National Education Policy will be implemented within the next 10 years and a roadmap for the implementation has already been prepared.

He also announced plans to set up a ‘Global Career Counselling Centre’ to clear students’ doubts about educational opportunities abroad.

BJP’s national secretary Sunil Deodhar, in his address, also lashed out at Atishi’s remarks saying the AAP leader should have informed the audience that the Kejriwal government in Delhi spends “Rs 600 crore of taxpayers’ money on advertisements every year”.

“When Narendra Modi became the chief minister of Gujarat, the first task he had taken up was to build separate toilets for girls in those 33,000 government schools. This is how policies are formulated and implemented. But you did not know about this initiative because he did not spend Rs 600 crore on its advertisement,” the BJP leader said.

13 Toaster hacks to get your morning going