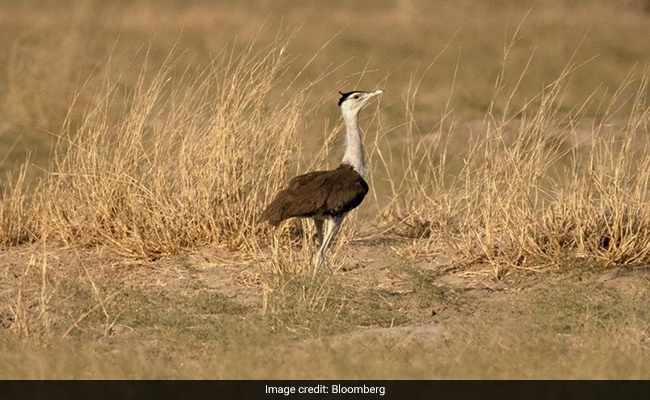 Great Indian bustards are among the heaviest flying creatures on earth.

The majestic, endangered bird is massive, making it slow to maneuver in flight. It has poor frontal vision, and an unfortunate habit of scanning the earth while flying across the flat grasslands of India’s western borders. That combination too often sets it on a fatal collision course with power lines.

Pity also, if you will, the plight of India’s renewable energy developers.

The wide-open region that’s home to the rare bird has long been an ideal location for wind and solar projects. In an effort to save the great Indian bustard from flying into power lines, a Supreme Court order is asking for transmission lines in a large swathe of the region to go underground. The companies say the directive could cost an estimated $4 billion in extra expenses, and jeopardize nearly 20 gigawatts of awarded solar and wind projects.

Before taking sides, though, be aware that the issue is more nuanced than a straightforward clash pitting industry against nature. The effort to save the bustard holds risks for what is arguably an even larger environmental cause: It could set back India’s climate goals, which depend heavily on the availability of wasteland like the bustard’s domain for putting up solar panels and wind turbines.

“The whole renewable industry, especially solar, could come to a standstill,” said Parag Sharma, chief executive officer at O2 Power Pvt., a Temasek Holdings-backed developer that’s building a 780-megawatt solar project in the western Indian town of Jaisalmer. “You won’t find land that easily anywhere else in the country.”

Other companies that have projects in the region include Adani Green Energy Ltd., ReNew Power Pvt. and Acme Solar Holdings.

The April ruling was a result of a petition filed in 2019 by M.K. Ranjitsinh Jhala, a former bureaucrat turned wildlife activist. The judges based their order on a report by the state-run Wildlife Institute of India, which said that “unless power line mortality is mitigated urgently, extinction of GIBs is certain.”

The court ruled that all low-voltage lines, including existing ones, need to be taken below the earth. It formed a three-member committee to examine the feasibility of also putting high-voltage cables underground.

The problem, according to the energy companies, is that the court went well beyond the report’s prescription. While the WII advised burying cables in a region where most of the birds live, the court also called for action in potential habitats, expanding the protection area and the cost burden for the companies.

“We were taken by surprise,” said Subrahmanyam Pulipaka, CEO of industry lobby National Solar Energy Federation of India. “We are discussing all options, including filing a review petition before the court, approaching the committee to present our case, or both.”

Great Indian bustards — the name means “slow bird” in Old French — are among the heaviest flying creatures on earth. They stand about 1 meter tall (3.3 feet), have a wing span of about 2 meters, and weigh nearly 18 kilograms, more than twice the size of a peacock. The easily frightened, ground-nesting bird used to roam across 11 states in India, but their dwelling ground has shrunk to mostly Rajasthan.

A WII survey covering 80 kilometers of power lines across the Thar desert region of the state found four bustard deaths during a single year due to high-transmission wires, including some connected to wind turbines. The study found that the birds died either because of the impact of the collision or electrocution.

Besides the transmission wires, a rapid conversion of grassland for farming or industrial projects and a slow birth rate — bustards lay one egg every year or two — have also led to their depleting numbers.

“These birds are on the brink of extinction and are now confined to a very small area. Saving that ecosystem should be as much a part of our climate goals as any other thing,” said Sreeja Chakraborty, a Bengaluru-based environment lawyer. “If the industry finds it tough to comply with the court’s order, they should move their projects to other locations.”

Since the ruling, the power companies and government and state officials have scrambled to find a solution for both businesses and birds. In a meeting in early May, the participants discussed the technical difficulties of taking high-voltage lines below ground, the cost implications and even environmental hazards of below-the-earth cabling, according to documents seen by Bloomberg.

Taking lines underground can inflate project costs and power prices by nearly 20% and getting lenders to fund the additional expenditure, estimated at around 300 billion rupees ($4 billion), could be a challenge due to regulatory delays, according to the solar lobby group’s Pulipaka.

“That means developers will have to put in their own equity money and then run around for years to get that reimbursed,” he said.

The court, in its ruling, acknowledged the need to weigh sustainable development for humans with the rights of other creatures. While it sought to find a balance between the two sides, the court gave more weighting to the heavy, poor-sighted bustards.

“Irrespective of the cost factor, the priority shall be to save the near extinct birds,” the two-judge bench ruled.

The Coup Against Chirag Paswan: The Inside Story