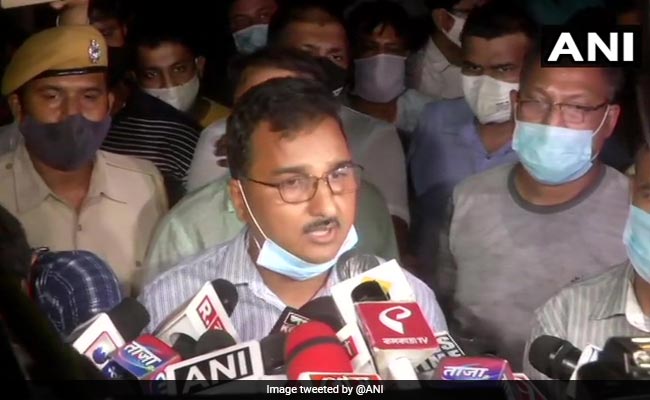 Two drug smugglers from Punjab, who were on the run after allegedly killing two policemen in Ludhiana, were gunned down by West Bengal police today during a shootout at a residential neighbourhood on Kolkata outskirts.

Jaipal Singh Bhullar and Jaspreet Singh were shot dead after they fired at officials of the Special Task Force during a raid at an apartment they were holed up in, said Punjab’s Director General of Police Dinkar Gupta.

V K Goyal, chief of the Special Task Force, said they had received information that some criminals were hiding in the apartment. “When we came for a raid, we found Jaspreet and Jaipal, who are wanted in several cases in Punjab. We tried to arrest them but they resisted and fired at us. In retaliation, we also fired & they were shot dead,” he was quoted as saying by news agency ANI.

He said an inspector was injured in the shootout and has been hospitalised. “Rs 7 lakh in cash, five weapons and 89 live rounds have been seized,” he said.

DGP Gupta told the media that Jaipal Bhullar and Jaspreet Singh were most wanted drug smugglers and had bounties of Rs 10 lakh and Rs 5 lakh, respectively, on their heads. The two, he said, were wanted in connection with the killing of Assistant Sub-inspectors of Police Bhagwan Singh and Dalwinderjit Singh at Jagraon in Ludhiana on May 15.

The policemen had gone to a grain market following a tip-off that drugs and illicit liquor were being smuggled there. As they were checking vehicles, they came under heavy firing and were shot dead. Subsequently, Jaipal Bhullar, Jaspreet Singh and others were booked for allegedly killing the policemen.

DGP Gupta said Punjab Police had launched a search for the accused and sent teams to several states.

He said police today arrested Bharat Kumar, an accomplice of Jaipal Bhullar, who was allegedly helping him after he and Jaspreet Singh fled to Gwalior.

DGP Gupta said Bharat Kumar told police that the two smugglers were hiding in a rented apartment in Kolkata. “Punjab Police immediately dispatched a special team for Kolkata by flight,” he said, adding that they coordinated with Kolkata Police to share inputs about the hideout.

He said a senior police officer from Kolkata Police informed later in the afternoon that the two smugglers were shot dead in retaliatory firing during the shootout.

“I am grateful to West Bengal Police, especially the ADGP & STF Chief of West Bengal, Mr. Vineet Goyal, IPS, who acted immediately on inputs provided by the Punjab Police and organised a raid at the Kolkata apartment where Jaipal was holed up alongwith his associate, Jassi,” said DGP Gupta.

The killing of Jaipal Bhullar and Jaspreet Singh and the arrest of two of his associates from Gwalior is a big blow to the heroin smuggling network operating from across the border, the senior officer said.

Police said Jaipal Bhullar was wanted in more than 25 cases and was involved in smuggling drugs in collaboration with major smugglers based in Pakistan. Jaspreet Singh, police said, was involved in at least four cases.