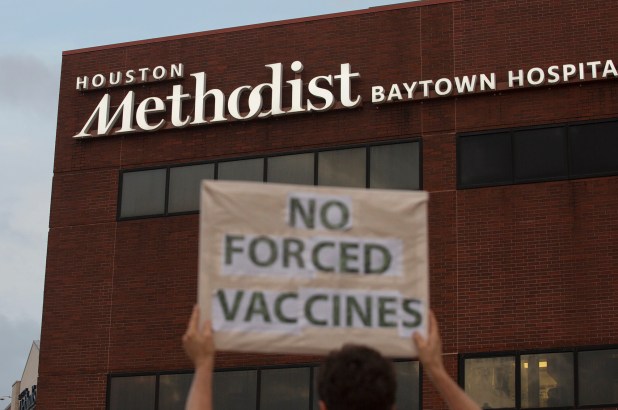 A person holds a sign at Houston Methodist Hospital in Baytown, Texas, to protest a policy that says employees must get vaccinated against COVID-19 or lose their jobs.
Yi-Chin Lee/Houston Chronicle via AP, File

More than 150 workers at a Houston hospital quit or were fired on Tuesday after being suspended for refusing to get vaccinated against the coronavirus.

The Houston Methodist Hospital system suspended 178 unvaccinated employees without pay two weeks ago for missing a June 7 deadline to get jabbed.

Whoever didn’t comply or resign during the suspension period was let go on Tuesday, system spokeswoman Gale Smith told The Post.

A group of 117 staff members had sued the hospital in May, claiming the COVID-19 vaccines were “experimental” and required inoculations made workers “guinea pigs.” The lawsuit compared the vaccine requirement to medical experiments inside Nazi Germany concentration camps.

But US District Judge Lynn Hughes tossed out the suit on June 12, condemning the Nazi comparison and saying it was false to label the vaccines as experimental.

The judge made a distinction in her ruling between an employment requirement and a forced inoculation.

“If a worker refuses an assignment, changed office, earlier start time, or other directive, he may be properly fired,” the judge wrote in her ruling.

“Every employment includes limits on the worker’s behavior in exchange for remuneration. That is all part of the bargain.”

The case has been appealed.

Who Is The Father, Nationality & More